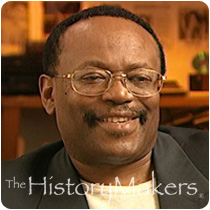 See how Lee Bailey is related to other HistoryMakers

Broadcast executive Lee Bailey has always been fascinated with radio. He was a regular visitor to radio stations in his hometown of Pittsburgh, Pennsylvania while growing up. His first experiences with radio began while he was still in the Air Force.

Nicknamed "The Voice," Bailey began his broadcast career in 1970 as an on-air radio personality in Sacramento, California followed by a job at a radio station in Washington, D.C. Bailey achieved the most fame while working at Los Angeles's KUTE-FM. His talent also led to voice over jobs for radio and television commercials in Los Angeles. Bailey converted his garage into a studio in 1979 and formed Lee Bailey Productions, a voice over production company. Lee Bailey Productions specialized in radio commercial spots and corporate slide presentations. As the company expanded, Bailey and his wife, Diane Blackmon Bailey, created RadioScope: the Entertainment Magazine of the Air, a syndicated radio show, and Bailey Broadcasting Services (BBS), in 1983.

Today, RadioScope is aired in daily and weekend versions in over 100 U.S. markets and in over 70 countries. It maintains the largest following of any syndicated urban radio show. Lee Bailey Communications, Inc. also produces two other popular daily programs, Inside Gospel and the Hip-Hop Countdown & Report. In addition to radio programming, Lee Bailey Communications has a strong presence on the World Wide Web. BBS Interactive maintains the online publication the Electronic Urban Report, a website that shares urban entertainment news.

See how Lee Bailey is related to other HistoryMakers
Click Here To Explore The Archive Today!