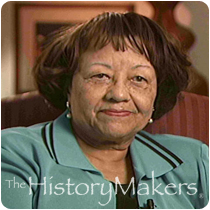 See how Leatrice McKissack is related to other HistoryMakers
Donate Now

Architect Leatrice B. McKissack was born Leatrice Buchanan to Catherine Brummell Buchanan and Archie Buchanan on July 27, 1930 in Keytesville, Missouri. McKissack was raised by her mother and stepfather, historian Dr. Alruthens A. Taylor, who was assistant to Dr. Carter G. Woodson and a dean at Nashville’s Fisk University. McKissack began her education at Marceline Elementary School in Missouri, attended Washington Junior High School in Nashville and graduated from Pearl High School in 1948. At Fisk University, she majored in chemistry and mathematics and was inspired by a faculty that included Aaron Douglas, Arna Bontemps, John W. Work, III, Langston Hughes and school president, Charles S. Johnson. In 1949, McKissack married William DeBerry McKissack, son of Moses McKissack, the 1905 founder of McKissack & McKissack, a historic African American architectural firm. McKissack graduated from Fisk University with her B.S. degree in mathematics in 1951. In 1957, she earned her M.S. degree in psychology from Tennessee State University.

McKissack began teaching elementary and junior high school students in Nashville’s segregated school system in 1952. However, poor health compelled her to resign in 1969. During her recuperation, McKissack collected the work of black artists and served on the Amistad II Art Advisory Board and the American Institute of Architects Auxiliary. McKissack assumed the management of the family-owned 216 unit College Hill Apartments in 1979. In 1983, after her husband suffered a stroke, she became the CEO of both McKissack & McKissack and McKissack Contracting Company. In 1984, McKissack sued the City of Nashville for racial discrimination and merged her firm with Thompson-Miller, becoming McKissack & McKissack & Thompson. In 1987, she was awarded the design contract for the National Civil Rights Museum in Memphis, Tennessee. That same year, McKissack landed a $50 million contract from Howard University and won the National Female Entrepreneur of the Year Award. In 1993, McKissack won the firm’s first contract with the TVA. She also recruited her three daughters, all professional engineers, back to the firm and expanded offices to Philadelphia, Washington, D.C., New York and Chicago. In 1991, she formed McKissack Development Corporation to build affordable housing.

McKissack has been a member of the Nashville Chamber of Commerce, the Tennessee Board of Economic Growth and President Clinton’s 1994 Design Award Jury. She is a board member of Fisk University, United Way, Cheekwood Fine Arts Center and the Nashville Symphony. McKissack’s many awards include the U.S. Department of Commerce’s National Female Entrepreneur Award in 1990 and the Human Relations Award from the Nashville chapter of the National Conference of Christians and Jews in 1996. The firm of McKissack & McKissack has been honored by the National Park Service by the listing of four of its buildings on the National Register of Historic Places.

McKissack was interviewed by The HistoryMakers on March 13, 2007.

See how Leatrice McKissack is related to other HistoryMakers
Donate Now
Click Here To Explore The Archive Today!