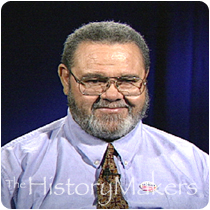 See how Lawrence Guyot is related to other HistoryMakers

Lawrence Thomas Guyot, Jr was born on July 17, 1939 in Pass Christian, Mississippi. He was a raised in a traditional Catholic home, attending parochial schools until high school. His mother was a domestic and his father was a builder and carpenter. His great-uncle, Louis Piernas was interviewed for the Slave Narratives Federal Writers Project in the 1930s. Guyot earned his high school diploma in 1957 from Randolph High School, where he was a member of the debate and basketball teams. As a young man, Guyot held a number of part-time jobs including janitor, longshoreman and waiter.

Guyot earned his B.S. degree in biology and philosophy from Tougaloo College in 1964. While at Tougaloo, he became active in civil rights and was one of the original members of SNCC. In 1964, Guyot directed the Freedom Summer Project in Hattiesburg, Mississippi. That same year, he was elected chairman of the Mississippi Freedom Democratic Party. He was unable to accompany the delegation to the Democratic National Convention in Atlantic City, New Jersey because he was jailed for registering black voters. The MDFP’s actions in New Jersey ultimately led to the DNC desegregating future conventions and the party itself. In 1966, Guyot ran for Congress as an anti-war candidate. After earning his law degree in 1971 from Rutgers University, he worked as a fundraiser for Mary Holmes Junior College in Mississippi. From 1971 until 1972, he worked for Pride Inc., a youth job-training program in Washington, D.C. In 1972, Guyot was hired to work in the D.C. Government by a SNCC colleague, former Mayor Marion Barry.

Guyot continues to work for the Department of Health and Human Services for the District of Columbia Government. He has also remained active in local politics and civil rights issues. He is an Advisory Neighborhood Commissioner for his Le Droit Park community. Guyot conducts leadership trainings for a number of organizations including Operation Understanding; the University of Ole Miss; Georgetown University and Americorp.

In 2004 Guyot co-authored Putting the Movement Back Into Civil Rights Teaching, a resource guide for K-12 classrooms. He has been featured in several documentaries, including Eyes on the Prize, Making Sense of the Sixties, The War on Poverty and Tales of the FBI.

See how Lawrence Guyot is related to other HistoryMakers
Click Here To Explore The Archive Today!