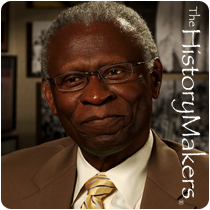 See how Lawrence Carter is related to other HistoryMakers

Chapel Dean and religion professor Lawrence Carter was born in Georgia to John and Bernice Carter and grew up in Ohio. He received his B.A. degree from Virginia University of Lynchburg and his M. Div., S.T.M., and Ph.D. degrees from Boston University. After his graduation he served as Baptist Counselor, Residential Counselor, and Executive Director of the Martin Luther King Jr. Afro American Cultural Center, and as Associate Dean of Daniel L. Marsh Chapel at Boston University. He went on to teach at Harvard University Divinity School and serve as coordinator of African American studies at Simmons College.

Carter was responsible for choosing and researching the site for the new edifice for Ebenezer Baptist Church, a church that both Martin Luther King Jr. and his father preached at. Carter has published several books, including Walking Integrity: Benjamin Elijah Mays, Mentor to Martin Luther King Jr. and Global Ethical Options, in the Tradition of Mahatma Gandhi, Martin Luther King, Jr., and Daisaku Ikeda . He also commissioned the Gandhi Ikeda King Hassan Institute for Ethics and Reconciliation in 1999, and created the Gandhi-King-Ikeda Community Builder’s Prize of the Morehouse Chapel in 2001. Carter is an advocate of the work of Doctor Daisaku Ikeda, president of the lay Buddhist organization Soka Gakki International, and has done much to publicize Ikeda’s work in the U.S., including helping to create a traveling museum exhibit on the life and work of Gandhi, King, and Ikeda.

Carter has received four honorary degrees from Lincoln University, Al al-Bayt University, and Soka University of Japan. He has been elected delegate to numerous international religious conventions, among them the Second and Third Synthesis Dialogues in Italy. He has also been given many awards, such as the Seikyo Award for Highest Honor and the Trumpet Award for Spirituality. Carter has been a National Endowment for the Humanities Fellow twice, a Fulbright-Hayes Scholar, and has been voted a member of the Class of Leadership Atlanta.
Lawrence Carter was interviewed by The HistoryMakers on July 15, 2010.

See how Lawrence Carter is related to other HistoryMakers
Click Here To Explore The Archive Today!