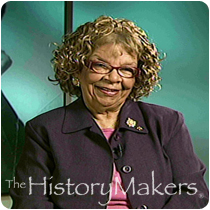 See how LaVerne Sci is related to other HistoryMakers
Donate Now

Historic Site Manager LaVerne Cecile Kenon Sci was born on January 3, 1940 in Jacksonville, Florida to Thelma Olivia Moore, a teacher, and Reuben R. Kenon, a high school principal. As a child, Sci attended segregated schools of Kings Welcome, College Park Elementary, Richardson Elementary and Richardson High School. As a youth, Sci desired to become a dancer, and her mother would drive sixty miles for her to take dance lessons.

In 1956, Sci entered Hampton University where she pursued her B.S. degree in health, physical education, recreation and biology. She led a very active life at Hampton University. She was the head majorette, a member of the dance group, worked on the school newspaper and was a member of the historic Phyllis Wheatley Society. After completing her degree at Northwestern University in Evanston, Illinois, she went on to teach in Fayetteville, North Carolina and then Farragut High School in Chicago, Illinois from 1960 until 1962. Sci then entered the University of Illinois at Urbana-Champaign where she pursued a combined M.A./Ph.D. program in History and Philosophy of Education.

After Sci’s mother lost her job helping to integrate the public schools of Columbia County, Florida, Sci dropped out of the University of Illinois in 1965 and worked as a teacher in the Unit Four Public School District to help support her mother’s legal struggle. In 1968, she met and married Frank Sci, a serviceman in the United States Air Force. Together, they relocated to Naha, Okinawa, Japan, there they became parents to two daughters, LaFrae and LaTania. The family then relocated to Montana, and they moved in 1972 to Dayton, Ohio where Frank was stationed as a Lieutenant Colonel. In Dayton, their son, Kenon Travis, was born. Parental responsibilities led Sci into community activism. In 1989, Sci was hired as Historic Site Manager of the Paul Laurence Dunbar House Museum in Dayton, Ohio.

Sci was interviewed by The HistoryMakers on February 24, 2008.

See how LaVerne Sci is related to other HistoryMakers
Donate Now
Click Here To Explore The Archive Today!