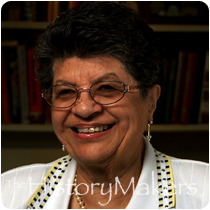 See how Lauranita Dugas is related to other HistoryMakers
Donate Now

Lifetime educator Lauranita Taylor Dugas was born on December 2, 1926 in Chicago, Illinois to Dorothy and Robert Taylor. Her father was the first black commissioner of the Chicago Housing Authority, an organization he worked with for eleven years. In 1944, Dugas graduated from Parker High School and moved to Wisconsin to attend the University of Wisconsin-Madison where she received her B.A. degree in sociology. In 1949, Dugas married Lester J. Dugas Jr., an electrical engineering student at the time who then became the first black senior manager of Commonwealth Edison in Chicago. The two of them moved to Milwaukee where the Dugas' began a family.

In 1953, Dugas moved back to Chicago. With an interest in education, she began working for the Head Start Program. Three years later, Dugas moved to the State of Illinois’ Institute for Juvenile Research and in 1974, she started working for the Chicago Child Care Society as a supervising teacher. Dugas remained with the Society for twenty-five years until her retirement in 1989. She then returned to the workforce as an educational consultant at Harold Washington College for their Child Development Associate Training Project, a position she held until 2007.

Dugas chaired the Jones-Swift Scholarship fund as part of the Chicago Metropolitan Association for the Education of Young Children, a sector of the national Association for the Education of Young Children. She was also a founding member of the Black Creativity Panel, an event hosted by the Museum of Science and Industry in Chicago. She was also a member of the Board of Advisors for the Department of Human Ecology at the University of Wisconsin - Madison. The board works to update the campus, with such projects as a new Early Childhood Development Center and renovation of the former Home Economics building. In 2009, the book The Classrooms All Young Children Need: Lessons in Teaching from Vivian Paley recognized her for her skillful teaching and support.

Lauranita Dugas was interviewed by The HistoryMakers on May 28, 2010.

See how Lauranita Dugas is related to other HistoryMakers
Donate Now
Click Here To Explore The Archive Today!