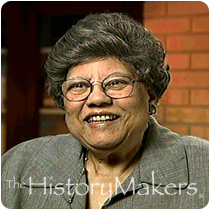 Favorite Color:
Beige
Favorite Food:
Cake (Strawberry Shortcake)
Favorite Time of Year:
Fall
Favorite Quote:
Do Unto Others As You Would Have Them Do Unto You

Favorite Color:
Beige
Favorite Food:
Cake (Strawberry Shortcake)
Favorite Time of Year:
Fall
Favorite Quote:
Do Unto Others As You Would Have Them Do Unto You

The 17th International President of Alpha Kappa Alpha (AKA) Sorority, Inc. Larzette Golden Hale-Wilson was born in Idabel, Oklahoma, to Thomas and Mary Golden. Under Hale-Wilson’s leadership, the AKA Sorority underlined the accomplishments of contemporary African American women through the founding of its Heritage Series. She is also the first black female Certified Public Accountant (CPA) in the United States to also hold a Ph.D. in accounting.

Hale-Wilson was initiated into the Alpha Zeta Chapter of Alpha Kappa Alpha Sorority at Langston University in 1937. She went on to graduate summa cum laude with her B.S. degree in business administration and secondary education in 1937. Hale-Wilson then married her college sweetheart, Dr. Henry William Hale in 1940. After completing her undergraduate studies, Hale-Wilson worked as a secretary to the business manager at her alma mater. She later enrolled at the University of Wisconsin-Madison where she earned her M.A. degree in accounting and finance in 1943. In 1951, Hale-Wilson passed the Certified Public Accountant Examination, and in 1955, she earned her Ph.D. in accounting. She established her own CPA office in Atlanta that same year .

In 1958, Hale-Wilson was elected to the office of International Treasurer at the Golden Anniversary Boulé and used her professional skills to initiate the AKA Sorority’s coordinated central accounting system. She went on to serve as the Basileus-Elect in 1964, and in 1966, she was elected as the 17th International President of the Sorority. In 1968, Hale-Wilson began the Heritage Series and produced more than five thousand copies of booklets on the accomplishments of contemporary African American women.

In 1971, Hale-Wilson and her family moved to Utah, and she was hired as a professor of accounting at Utah State University. She went on to write several articles in various business education journals including The Balance Sheet and the Journal of Business. In 1974, Hale-Wilson was appointed by the governor of Utah to the State’s Committee on Cultural Awareness and later she served as chair of the supervisory committee of the Utah State University Credit Union.

See how Larzette Hale-Wilson is related to other HistoryMakers
Donate Now
Click Here To Explore The Archive Today!