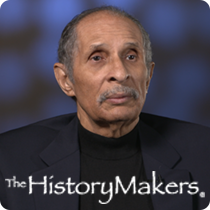 Jazz musician and music professor Larry Ridley was born on September 3, 1937 in Indianapolis, Indiana to Lawrence and Nevolena Ridley. He was taught to play the violin at the age of five, but later became interested in jazz music and learned to play the bass. Ridley graduated from Shortridge High School in Indianapolis, Indiana. He went on to attend Indiana University in 1955, but completed his B.S. degree at New York University in 1971. He earned his M.A. degree in cultural policy from the State University of New York Empire State College in 1993, and his Ph.D. degree in performing arts from the University of Maryland, Eastern Shore in 2005.

After attending the Lenox School of Jazz summer program in 1959, Ridley moved to New York City to pursue a career as a professional jazz musician. In the 1960s, Ridley was active in the New York jazz music scene, playing on tours and in studio recordings with a wide range of notable jazz musicians, including Horace Silver, Sonny Rollins, Philly Joe Jones, John Coltrane, Duke Ellington, Lee Morgan, and Jackie McLean. In 1971, he was hired as a professor of music at Rutgers University’s Livingston College, where he developed the college’s jazz education program, creating both bachelor’s and master’s degree programs in jazz performance. From 1970 to 1973, he toured the world as the bassist for Thelonious Monk. Ridley released his own album, Sum of Parts, in 1975. From 1981 to 1985, he played as part of the tribute band Dameronia, in honor of the composer Tad Dameron. In 1985, Ridley formed his own group, the Jazz Legacy Ensemble, releasing two albums Live at Rutgers University and Other Voice. Ridley retired from Rutgers in 1999, but continued to teach at the Manhattan School of Music and Swing University at Jazz at the Lincoln Center. He chaired the National Endowment for the Arts’ Jazz Panel. He also served as the coordinator of the Jazz Artists in Schools program, executive director of the African American Jazz Caucus and northeast regional coordinator for the International Association for Jazz Educators.

Ridley received numerous awards and accolades for his work in jazz music and education. He was inducted into the International Association for Jazz Educators Hall of Fame, the Downbeat Magazine Jazz Education Hall of Fame, and the Indianapolis Jazz Foundation Hall of Fame. He was honored by a Juneteenth 2006 Proclamation Award from the New York City Council, and was the recipient of the Meade Legacy Jazz Griot Award, the Congressional Black Caucus Foundation Jazz Legacy Award, the MidAtlantic Arts Foundation’s Living Legacy Jazz Award, and the Benny Golson Jazz Award from Howard University.

Larry Ridley was interviewed by The Historymakers on November 30, 2016.