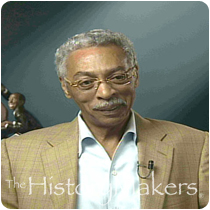 See how Larry Langford is related to other HistoryMakers

Political leader, former mayor of Fairfield, Alabama, and mayor of Birmingham, Alabama, Larry Paul Langford was born in Birmingham, Alabama on March 17, 1948, to Lillian and John Langford. Langford graduated from Parker High School and received his B.A. degree in social and behavioral science from the University of Alabama in 1972. Langford was also the recipient of an honorary doctorate from Miles College and completed studies at Harvard University in public policy.

After a short stint in the United States Air Force, Langford began his career as a television reporter for WBRC-6 and later worked in public relations for a Birmingham beer distributor before beginning his career in politics. In 1979, Langford joined the Birmingham City Council after an unsuccessful run for mayor of Birmingham. In 1982, Langford moved to Fairfield, Alabama, where he was elected mayor. He held the office for fourteen years, and in 1997, played a major role in the effort to build Vision Land Theme Park (which is now known as Alabama Adventure) to boost Alabama tourism.

After his tenure as mayor, Langford was elected in 2002 to the Jefferson County Commission, where he served as Commission President and Commissioner of Finance and General Services. While working with the Commission, Langford spearheaded nearly seventy public initiatives, including a sales tax to support school construction and a four day work week for county employees. Langford was re-elected as commissioner in 2006, after which he led efforts to bring an NBA team to the Birmingham area. In 2007, Langford was elected the thirtieth mayor of Birmingham, Alabama. After his election, Langford remained active in the Scared Heart of Jesus, teaching bible study; he and his wife, Melva, had a son and two grandsons.

See how Larry Langford is related to other HistoryMakers
Click Here To Explore The Archive Today!