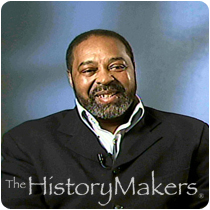 See how Larry Huggins is related to other HistoryMakers
Donate Now

Pioneering construction executive Larry Andrew Huggins was born on February 5, 1950 in the Englewood neighborhood of Chicago, Illinois to Mary Hightower. The second of four siblings, he graduated from Englewood High School in 1968 and continued his education at Washburne Trade School, where he got his painter’s certificate in 1972.

Huggins began his career as a painter for the black-owned Brown’s Drywall Company in 1975. His own company, Riteway Construction, began as Riteway Painting and Decorating in 1983, and with help from mentoring by larger firms and projects set aside in affirmative action programs, Huggins’ company acquired several of the most pivotal construction projects of the time including the Harold Washington Library, the United Airlines terminal at O’Hare Airport and the Chicago Board of Trade building. Huggins’ company, Riteway Construction, saw continued success in the 1990s and landed a joint deal as contractor for the Unicom Thermal Technologies, Inc., the $6 million district cooling plant. Huggins was a founding member of Black Contractors United, which continues to support and pave the way for African Americans in the construction industry.

Huggins and Riteway Construction have committed to many projects on Chicago’s West and South Sides. Riteway Construction continues to flourish as an award-winning construction service, obtaining major municipal, residential and commercial ventures each year, including the 2005 McCormick Place expansion and remodeling an apartment complex defaulted by the U.S. Department of Housing and Urban Development in 1997. In 1997, Huggins became the first African American to sit on the board of Chicago’s commuter rail system, Metra. In 2001, Riteway Construction was contracted on the ten-year re-development of the Ida B. Wells housing projects, which a team including Riteway Construction have worked to rebuild into market-rate, affordable housing for the Chicago Housing Authority.

Many of Huggins’ numerous philanthropic efforts lead back to his childhood community in Chicago. He gives scholarships to single-parent children and created a $10,000 yearly scholarship at Englewood High School. Huggins is a continuous participant in the Chicago Public School’s “Principal for a Day” Program. In 1996, he gave $7,000 worth of toys to children in his old neighborhood of Englewood. Many organizations have recognized Huggins for his groundbreaking career and service to the Chicago community, including the Chicago Defender, the Chicago Urban League, the African American Contractors Association, Bank of America and the Chicago Economic Development Corporation. He is still a resident of Chicago and was honored by Englewood High School with the Larry Huggins Basketball Shootout.

Huggins was interviewed by The Historymakers on February 4, 2008.

See how Larry Huggins is related to other HistoryMakers
Donate Now
Click Here To Explore The Archive Today!