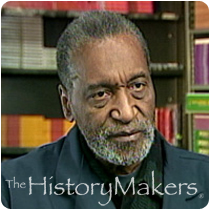 See how Larry Hawkins is related to other HistoryMakers
Donate Now

Educator, youth organizer, championship coach, and sports authority Larry Hawkins was born on December 12, 1930 in Chicago, Illinois. The Wabash YMCA, the Southside Boys Club and Phillips High School formed a “golden triangle” of athletic activity for youth in his neighborhood. Hawkins attended Douglas Elementary School and graduated from Phillips High School, where he was a star basketball player in 1948. He received an A.A. degree from Wilson Junior College in 1950. Hawkins served in the United States Army from 1953 to 1955. He acquired his B.S. degree from George Williams College in 1956, his M.S. degree in 1972 from George Williams, another M.S. degree from Roosevelt University in 1980 and his Ed.D. from the University of Illinois in 1986.

As coach for Chicago’s Carver High School, Hawkins’ 1962 team featured future NBA champion, Cazzie Russell. This team lost the Illinois state championship by one point. In 1963, Hawkins cultivated the clutch potential in unknown sophomore Anthony Smedley, who hit a shot with five seconds left on the clock to clinch the championship. He coached volleyball at Hyde Park High School and advocated for girls athletics. Hawkins founded the Institute for Athletics and Education in 1972. Through this effort, he prepared hundreds of students to move on to college. Hawkins also founded the Parent Athletic Support Team and the National Parents Committee on Youth Sports. He served with Big Buddies Youth Services, Concerned Coaches of Chicago, the Educational Advisory Committee of the Urban League, the U.S. Olympic Committee on Youth Identification and the First Congressional District Legislative Council, among others. As director of the Office of Special Programs at the University of Chicago, Hawkins steered at risk youth towards college, while acting as mentor, counselor, and teacher.

Hawkins, who lived in Chicago, was sought nationally as an authority on African Americans in sports and has published widely. In 1984, he received the Distinguished Alumnus Award from George Williams College.

Hawkins was interviewed by The HistoryMakers on December 2, 2003.

See how Larry Hawkins is related to other HistoryMakers
Donate Now
Click Here To Explore The Archive Today!