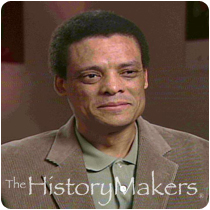 See how Larry Gladney is related to other HistoryMakers

Research physicist and professor Larry Donnie Gladney was born on August 9, 1957, in Cleveland, Mississippi, to Annie Lee Gladney and Lucius Green Walker. Raised by his mother in East St. Louis, Illinois, Gladney attended Alta Sita Elementary School, Clarke Junior High School, and graduated third in his class from East St. Louis High School in 1975. Keenly interested in the nature of matter, Gladney earned his B.A. degree in physics from Northwestern University in 1979, and went on to Stanford University to earn his M.S. degree, then his Ph.D. in physics in 1985. Gladney pursued post-doctoral studies at the University of Pennsylvania from 1985 to 1988.

Gladney, teaching and conducting research at the University of Pennsylvania’s Department of Physics in 1988, developed the third-level tau lepton triggers for the Collider Detector at Fermilab. From 1989 to 1994, Gladney served as a Presidential Young Investigator for the National Science Foundation. He was awarded a Lilly Teaching Fellowship in 1990, and by 1992 Gladney made the first observation of an exclusive B meson decay in the hadron collider environment. In 1997, Gladney received the coveted Edward A. Bouchet Award from the American Physical Society, and the Martin Luther King, Jr., Lecturer Award from Wayne State University. By 2000, Gladney had been selected as the American representative to the Computing Coordinating Group for BaBar; he was then selected to head the Level 3 Trigger effort for the BaBar experiment at the SLAC PEP-II Collider. Gladney, from 2003 to 2004, was a visiting scholar at the Lawrence Berkeley National Laboratory.

Interested in the success of young people, Gladney was the recipient of the Outstanding Community Service Award from the Black Graduate Professional Students’ Association at the University of Pennsylvania. Gladney was also an occasional lecturer on the subject of seeing and researching dark energy, and in 2006 appeared on a program entitled The Three Cosmic Tenors: Exploring the Frontiers of Matter, Energy, Space and Time with other black physicists, James Gates and Herman B. White, Jr.

See how Larry Gladney is related to other HistoryMakers
Click Here To Explore The Archive Today!