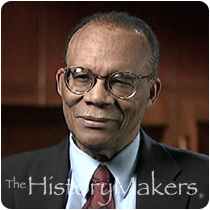 See how Larry Gibson is related to other HistoryMakers
Donate Now

Larry Gibson was born in Washington, D.C. on March 22, 1942. His mother was a domestic worker and cook and his father worked as a janitor. He earned his high school diploma from Baltimore City College High School in 1960, where he was the first African American class president, a member of the track team and drama club.

From 1960 to 1964, Gibson attended Howard University, where he organized his first political campaign for a female classmate who was running for Homecoming Queen. While at Howard, Gibson was student body president, chairperson of D.C. Students for Civil Rights and pledged Kappa Alpha Psi Fraternity. In 1967, he earned his law degree from Columbia University in New York.

Between 1963 and 1970, Gibson worked as an associate for Brown, Allen, Dorsey and Josey. From 1969 to 1975, Gibson served on the Baltimore City School Board. In 1970, he became a partner at the firm he had been working at, Josey, Gibson, Allen and Mitchell, and a year later he handled the first of his many high profile cases, representing the Black Panther party in a murder case and winning. In 1972, Gibson became the first African American law professor at the University of Virginia, a post he held until 1974. Gibson then accepted a position at the University of Maryland law school as an associate professor. In 1977, he was named a full professor at Maryland, where he continues to teach civil procedure, evidence, election law and race and the law.

Gibson has also continued to be active in politics throughout his career. From 1977 to 1978, he served as associate deputy attorney general in the Carter Administration. From 1978 to 1979, Gibson served as Director of the National Economic Crimes Project. In 1987, Gibson helped mastermind Kurt Schmoke's campaign for mayor of Baltimore. He would serve as Schmoke's campaign manger for his 1991 and 1995 mayoral campaigns as well. In 2001, he served as campaign consultant and political advisor for the Ravalomanana for President of Madagascar campaign.

Gibson is currently working on an oral history project about Maryland's African American lawyers and writing a book on Thurgood Marshall's first four years of practicing law from 1933 to 1937. He is of counsel at Shapiro, Sher, Guinot and Sandler where he represents the World Umpires Association which includes all professional baseball umpires.

See how Larry Gibson is related to other HistoryMakers
Donate Now
Click Here To Explore The Archive Today!