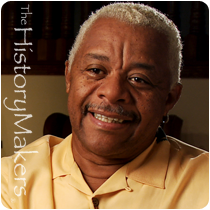 See how Larry Dodson is related to other HistoryMakers
Donate Now

R&B singer Larry Dodson was born in 1951, and started his first vocal group, called the Temprees, when he was eleven years old. The Temprees went on to sign with Stax Records and record several hit songs, but by then Dodson had left the band to sing with The Bar-Kays and recorded his first record with them, called Black Rock .

The Bar-Kays had been formed in 1966, and by the time Dodson joined them they were already the number-two house band at Stax Records. None of the members of the Bar-Kays were formally educated in music, but that did not prevent them from being highly successful while writing many of their own songs. They sang backup for Otis Redding, Isaac Hayes, and other popular soul singers under the Stax Record label and recorded many hit songs in their own right, including “ Soul Finger ” and “ Son of Shaft ”. They performed “ Son of Shaft ” at the Wyattstax music festival in 1972, and were featured in the Golden Globe-nominated documentary Wyattstax made about the concert.

After Stax Records went bankrupt in 1975, The Bar-Kays signed with Mercury Records and the band went on to have twenty-three singles on the R&B charts from 1976 to 1987. The Bar-Kays’ music has been featured in the soundtrack to several films, including Spies Like Us and Superbad . The group broke up in 1993, and reformed a year later with Dodson and one other member of the original band. They continued to tour and write songs, enjoying a renewed popularity.

Dodson is the co-founder of the Right Now Records record label, along with The Bar-Keys founding member James Alexander. Dodson is also a Downs Syndrome awareness advocate and serves on the board of directors of the Downs Syndrome Association of Memphis and the Mid-South. He wrote and helped organize the recording of the song “A Message from Memphis” by a large group of well-known Memphis-born musicians for the benefit of Haiti after the 2010 earthquake there. Proceeds from sale of the song and the short documentary about the song’s recording were donated to various charities in Haiti, including the American Red Cross.

See how Larry Dodson is related to other HistoryMakers
Donate Now
Click Here To Explore The Archive Today!