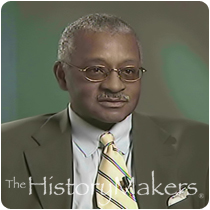 See how Larry Dingle is related to other HistoryMakers

Larry Dingle was born in rural Dillon, South Carolina, on June 26, 1949. Dingle was an agent of change in his hometown of Dillon, South Carolina; he desegregated the high school closest to his home. From there, Dingle attended Morehouse College to pursue his undergraduate education; he transferred to Georgia State University, where he was awarded his B.A. degree in 1974, and his J.D. degree in 1987, enabling him to practice law.

Dingle was a police officer for the City of Atlanta and then worked for the City of Atlanta from 1969 to 1990 as a department head and Clerk of Council. It is in this capacity that Dingle gained the confidence and support of then Mayors Maynard Jackson and Andrew Young as a civil servant of considerable talent. From 1990 to 1997, Dingle worked as a partner at the law firm of Peterson, Dillard, Young, Asselin and Powell. Dingle later became a partner at Wilson, Brock, and Irby, L.L.C., where he earned great prestige through his representation of clients such as Saks Fifth Avenue.

Dingle served on the Board of Directors of Southeast Energy; the Bank of North Georgia; Central Fulton Senior Services; and Georgia State University’s Board of Visitors. Dingle was a member of the Georgia Bar Association for twenty years. In 1990, Dingle co-authored Major Land Use Laws in Georgia, which was published by the National Business Institute, Inc. Dingle earned distinction in the City of Atlanta as a civil servant and attorney and was recognized nationally for contributions to the practice of law.

See how Larry Dingle is related to other HistoryMakers
Click Here To Explore The Archive Today!