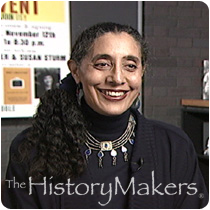 Lani Guinier was born on April 19, 1950, in New York City. Her father, Ewart, was a lawyer, union organizer, and real estate agent, and her mother, Eugenia, was a public school teacher. In the late 1960s, Guinier attended Harvard University and was one of the students who petitioned for the establishment of an African American studies program there, which was later headed by her father. In 1971, she graduated from Harvard’s Radcliffe College. In 1974, Guinier graduated from Yale Law School, where former President Bill Clinton was one of her classmates.

During the 1970s, she was head of the voting rights project for the NAACP Legal Defense Fund. In this position, she helped win major victories in voting rights cases in Alabama and other southern states. In 1998, when Guinier joined the Harvard Law School faculty, she became the first African American woman tenured professor in the law school’s history.

Guinier came to public attention in 1993 when President Clinton nominated her to be the first black woman to head the Civil Rights Division of the U.S. Department of Justice. She had been a civil rights attorney for more than ten years and had served in the Civil Rights Division during the Carter Administration as special assistant to then Assistant Attorney General Drew S. Days. Immediately after her name was put forward in 1993, conservatives attacked Guinier’s views on democracy and voting, driving Clinton to abruptly withdraw her nomination without a confirmation hearing. That experience led Guinier to use her subsequent public platform to speak out on issues of race, gender and democratic decision-making and to call for candid public discourse on these issues.

She wrote and published a series of books that unveiled her views and commitment to social justice and political participation in America and finished a memoir on the controversy she was immersed in, exploring the politics surrounding the derailment of her Justice Department nomination, and assessing the progress and potential of the Civil Rights Movement. Lift Every Voice: Turning a Civil Rights Setback into a New Vision of Social Justice was published in April 2004. Her books revived a national discussion about the meaning of democracy.

Lani Guinier was married to Nolan Bowie, and they are the parents of a son, Nikolas.