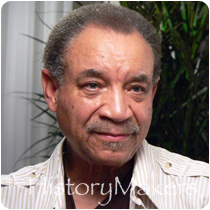 See how Lamonte McLemore is related to other HistoryMakers

Photographer and singer Lamonte McLemore was born on September 17, 1935, in St. Louis, Missouri, to June and Herman J.C McLemore. Abandoned by his father at the age of five and having a mother who worked long hours, McLemore was largely raised by his maternal grandmother, Gertrude Whitecloud Shaver. He graduated from Charles H. Sumner High School in 1952 and enlisted in the United States Navy, where he worked as an aerial photographer.

Athletically gifted, McLemore was the first African American athlete to try out for the St. Louis Cardinals. He moved to Los Angeles, California, and landed a short-lived minor league career with the Los Angeles Dodgers as a strong-arm pitcher.

In 1958, McLemore began his career as a photographer with Halmont Graphics, a company he co-founded. He became the first African American photographer hired by Harper’s Bazaar magazine and was the photographer chosen to shoot Stevie Wonder’s first album cover. McLemore has been a photographer for Jet and Ebony magazines for over forty years. During McLemore’s photo shoot of the Miss Black Beauty Pageant in the mid-1960s, he discovered the talents of Marilyn McCoo and Florence LaRue. McLemore offered the two women a chance to join a group he and his friends, Billy Davis, Jr. and Ron Townson, were forming. Out of this collaboration, The 5th Dimension was created. Their first manager was musician Ray Charles.

The 5th Dimension experienced exceptional success over the years, receiving more Grammy Awards than The Beatles. Their biggest hit was Aquarius, which led to the album The Age of Aquarius. The album and the single both went gold and received two Grammy Awards for Record of the Year and Best Contemporary Vocal by a Group or Duo. In 1991, the original 5th Dimension received a star on Hollywood’s Walk of Fame.

In 2006, McLemore retired from the group, but continues to sing with Flashback, a vocal group made up of other singers from the 1960s who entertain for charity events.

McLemore resides in Las Vegas, Nevada, with his wife, Mieko.

Lamonte McLemore was interviewed by The HistoryMakers on April 3, 2007.

See how Lamonte McLemore is related to other HistoryMakers
Click Here To Explore The Archive Today!