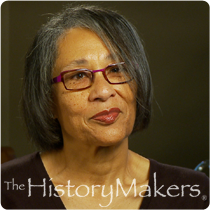 See how Lalita Tademy is related to other HistoryMakers

Author and corporate executive Lalita Tademy was born in 1948 in Berkeley, California to Nathan Green Tademy, Jr. and Willie Dee Billes. She was the youngest of four siblings, including two older sisters, Theodorsia and Joan, and an older brother, Lee. In 1956, her family moved to Castro Valley, California, where her father worked as a contractor. She attended A.B. Morris Junior High School and Castro Valley High, where she was a National Merit Scholar. In 1964, Tademy was accepted at Howard University in Washington, D.C. with a full academic scholarship. Two years later, she transferred to the University of California at Los Angeles. Tademy graduated with her B.S. degree in psychology in 1970 and in 1972, she earned her M.B.A. degree from the Graduate School of Management at the University of California at Los Angeles.

Tademy worked for the Bay Area Rapid Transit, Memorex Corporation, and ITT’s printer company, Qume. In 1985, she helped found ALPS America, a unit of Japan’s ALPS Electric Company, where she was in charge of marketing high-performance dot-matrix printers. Tademy was hired as Vice President and General Manager of Sun Microsystems in Silicon Valley in 1992. In 1995, she quit her executive position to pursue other passions. Tademy researched her family history intensively for three years before deciding to write a novel. In 2001, her first novel, Cane River, was published to much acclaim and was featured on the Oprah Winfrey Show. The book chronicled the lives of her maternal ancestors. In 2007, she published her second novel, Red River, whose content was also drawn from her family history research.

Tademy was featured in Fortune’s “People on the Rise” column and Ebony’s “Speaking of People” feature in 1989, and in 1998, she was named as African American Innovator in the New Millennium at the Silicon Valley Tech Museum of Innovation. In 2001, Cane River was chosen as part of Oprah’s Book Club Series, and became a New York Times bestseller. Red River was selected as Border’s Interactive Book Club Pick in 2007 and as an Essence Book Club Pick in 2008. Tademy lives with her husband, corporate executive Barry Williams, in Menlo Park, California.

Lalita Tademy was interviewed by the The HistoryMakers on November 7, 2012.

See how Lalita Tademy is related to other HistoryMakers
Click Here To Explore The Archive Today!