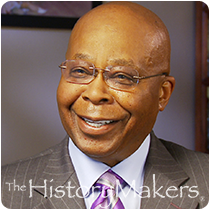 See how Lafayette Jones is related to other HistoryMakers

Marketing chief executive and publisher Lafayette Glenn Jones was born on February 17, 1944. He credits his parents, who managed a small landscaping business, with his own entrepreneurial drive. Jones received his B.A. degree from Fisk University in 1965, and went on to attend executive management programs at Dartmouth College’s Amos Tuck School of Business and Stanford University’s School of Business.

Jones first worked for the Job Corps and the YMCA as a program director in the mid-1960s. He then directed client promotions at the Washington, D.C. radio station WOL from 1967 to 1969. From 1969 to 1974, he worked as a sales and marketing executive for Lever Brothers, Pillsbury Company and General Foods. From 1974 to 1979, Jones served as a marketing manager for Hunt-Wesson, where he created the Orville Redenbacher Gourmet Popping Corn and Hunt's Manwich strategies. In 1979, he was appointed as vice president of marketing and sales at Johnson Products Company in Chicago, Illinois. In 1981, Jones founded and served as executive director of the American Health and Beauty Aids Institute (AHBAI), the trade association of black hair care companies. He also founded Smith-Jones & Associates, an association management firm.

In 1988, Jones was named vice president and general manager of Supreme Beauty Products Company, the hair care subsidiary of Johnson Publishing Company. He then joined Sandra Miller Jones’ Segmented Marketing Services, Inc. (SMSi) in the early 1990s, where he went on to serve as president and chief executive officer of SMSi-Urban Call Marketing, Inc. and publisher of the company’s Urban Call magazine. Jones also became publisher of SMSi’s Shades of Beauty magazine in 1998.

Jones has authored articles for numerous publications including OTC Beauty Magazine and the Beauty Industry Report. He authored a column in Sophisticate's Black Hair Styles and Care Guide and the 1999 Green Book’s special section on ethnic hair care. Jones also wrote a column for ShopTalk magazine for fifteen years. He is a frequent speaker at conferences and has guest lectured at Harvard University, Dartmouth College, Duke University, Wake Forest University, and Howard University. Jones has also served on the boards of several organizations including Urban Getaways, the Mardan Institute and the Promotion Marketing Association.

Jones is married to his business partner, Sandra Miller Jones. He is the father of four children: Kevin, Melanie, Tara and Bridgette.

Lafayette Jones was interviewed by The HistoryMakers on August 14, 2014.

See how Lafayette Jones is related to other HistoryMakers