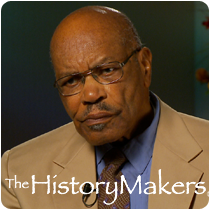 See how Lafayette Frederick is related to other HistoryMakers

Botanist Lafayette Frederick was born on March 9, 1923 in Dog Bog, Mississippi. Frederick’s interest in botany began as an undergraduate student at Tuskegee Institute (now Tuskegee University) where he was inspired by the famous botanist and plant chemist George Washington Carver. After earning his B.S. degree in biology from Tuskegee Institute in 1943 and his M.S. degree in botany from the University of Rhode Island in 1950, Frederick went on to graduate from Washington State University with his Ph.D. degree in plant pathology and botany. His doctoral thesis focused on spore development in fungi, systematics and ecology of the myxomycetes, and the Dutch elm disease.

Upon completion of his postdoctoral studies at Cornell University, the University of Illinois and the University of Michigan, Fredrick was hired as an assistant professor at Southern University in the biology department. There, he developed a botany concentration during his ten years at the school. He also developed a botany concentration at Atlanta University, where he chaired the biology department during his fourteen-year tenure. In 1958, Frederick was responsible for integrating the Association of Southeastern Biologists meeting, which had not allowed its African American members to attend. He also served as director of the National Science Foundation (NSF) Academic Year Institute for Science Teachers. Frederick worked on several projects that involved studies on antifungal substances of a strain of bacterium. In 1976, Frederick was hired by Howard University where he went on to serve as a professor and chairman in the department of botany, acting dean for the College of Liberal Arts, and emeritus professor of biology.

Among Frederick’s honors are an Honorary Doctorate of Science degree in botany and a Distinguished Alumni Award, from the University of Rhode Island; the Botanical Society of America Merit Award; the NSF Education and Human Resources Directorate Lifetime Achievement Award; the American Association for the Advancement of Science Lifetime Mentor Award; and a Tuskegee Institute Distinguished Alumni Merit Award. A species of Hawaiian shrub, Cyrtandra Frederickii, was named in his honor by Harold St. John, former chairman of the University of Hawaii department of botany.

Lafayette Fredrick was interviewed on The HistoryMakers on December 12, 2012.

See how Lafayette Frederick is related to other HistoryMakers
Click Here To Explore The Archive Today!