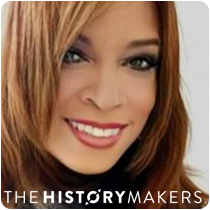 Favorite Color:
Green
Favorite Food:
Seafood/Mexican
Favorite Time of Year:
Christmas
Favorite Vacation Spot:
Saint Lucia
Favorite Quote:
As Long As You Believe In Yourself You Can Achieve What Is Waiting For You.

Favorite Color:
Green
Favorite Food:
Seafood/Mexican
Favorite Time of Year:
Christmas
Favorite Vacation Spot:
Saint Lucia
Favorite Quote:
As Long As You Believe In Yourself You Can Achieve What Is Waiting For You.

See how Kym Longino is related to other HistoryMakers
Donate Now

Stuntwoman Kym Longino was born on October 19, 1957 in Boston, Massachusetts to Carol Washington and Richard Washington, a Hollywood stuntman and stunt coordinator. Longino graduated from Alexander Hamilton High School in Los Angeles in 1975, and attended Santa Monica City College, where she studied business and health science.

In 1979, Longino served as the stunt double for Nichelle Nichols in Star Trek: The Motion Picture; and again, in 1982, for the film Star Trek II: The Wrath of Khan. In 1985, Longino was a stunt double for both Oprah Winfrey and Whoopi Goldberg in The Color Purple. In 1988, Longino performed stunts in the movie Mississippi Burning alongside her father, Richard Washington. From 1988 to 2012, Longino worked as a stunt performer on the television show America’s Most Wanted. She also performed stunts on the television show Rescue 911 from 1989 to 1996 as well as the film Ghostbusters II in 1989. A long time stunt double for Whoopi Goldberg, Longino performed stunts in several of her films during the 1990s, including Ghost in 1990, Sister Act in 1992, Sister Act 2: Back in the Habit in 1993, Made in America in 1993, and Corrina, Corrina in 1994. In 1999, she performed stunts in Girl, Interrupted; and in 2001, she was appeared as a stuntwoman in Hannibal. Longino was a stunt driver on the television show Third Watch from 1999 to 2005. She worked as both a stunt performer and stunt driver in Taxi (2004) and in King’s Ransom (2005). In 2006, Longino was featured in a documentary about top African American stuntwomen called Hollywood At Its Best. Longino has worked as a stunt double for Queen Latifah, Viola Davis, Tamara Tunie, Halle Berry, Denise Richards, and Taraji P. Henson on the television show Person of Interest from 2011 to 2013. She also appeared in over eighty films and television shows, and acted in commercials for Dodge, GMC Trucks, Toyota, Pizza Hut, and McDonalds.

Longino was a member of the Screen Actors Guild and an Arbonne independent representative. In 2011, she received a Diamond in the Raw Lifetime Achievement Award and an Alzheimer’s Association Celebrity Guest Award.

Kym Longino was interviewed by The HistoryMakers on March 19, 2018.

See how Kym Longino is related to other HistoryMakers
Donate Now