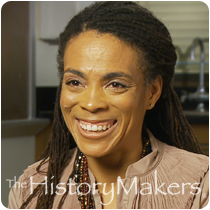 See how Krishna Foster is related to other HistoryMakers

Chemist and chemistry professor Krishna L. Foster was born on January 7, 1970 in Culver City, California to parents Warren Foster and Frances Smith Foster. Her father, a sales representative for International Business Machines (IBM), and her mother, a professor of English and women’s studies, encouraged Foster and her brother to excel in school. Foster graduated from Helix High School in La Mesa, California in 1988, and she received a NASA Fellowship through the Women in Science and Engineering Program. After earning her B.S. degree in chemistry from Spelman College in 1992, and graduating magna cum laude, Foster decided that she wanted to study environmental chemistry. She continued her education at the University of Colorado at Boulder, where she earned her Ph.D. degree in physical chemistry in 1998. Her final dissertation was entitled, “Laboratory studies on the Interaction of Hydrogen Halides with Ice Films.”

Foster became a postdoctoral researcher at the University of California, Irvine in 1998. In this position, she used mass-spectrometry to examine to what extent sea-salt particles impact the oxidizing capacity of the lower-atmosphere. In 2000, she accepted a position as an assistant professor at California State University, Los Angeles. She received a promotion in 2006 to become an associate professor with tenure. Her work at California State University, Los Angeles, has focused on the effects of sunlight on pollutants at the air-water interface. Her lab has also worked to develop techniques in studying reduced phosphorous oxyanions in natural waters. This study might prove useful in determining how phosphorous, an essential element in all organisms, might have been initially incorporated into living cells in ancient earth.

Foster has served as a mentor to twenty-six high school, undergraduate, and graduate students in providing and guiding research opportunities. Alumni of her lab group have found success in both academia and industry. In 2007, she was honored with the Distinguished Women Award at California State University, Los Angeles.

Krishna L. Foster was interviewed by The HistoryMakers on April 28, 2011.

See how Krishna Foster is related to other HistoryMakers
Click Here To Explore The Archive Today!