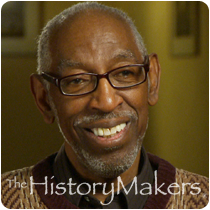 See how Kojo Kamau is related to other HistoryMakers

Photographer Kojo Kamau was born on October 11, 1939 in Columbus Ohio to Robert Jones, a railroad worker and Elizabeth Patterson, a housewife. Kamau grew interested in photography from an early age and bought his first camera when he was a teenager. He graduated from East High School in Columbus, Ohio in 1957 and went on to study at the Columbus Art School (now the Columbus College of Art and Design). In 1960, Kamau joined the United States Air Force where he worked as a information specialist editing the Myrtle Beach Air Force Base newspaper.

After four years of service, Kamau returned to Columbus and began working for the Ohio State University’s School of Medical Professions (now the School of Health and Rehabilitation Sciences) as a photographer in the medical illustration department. In 1974, Kamau began photographing one of his favorite subjects, the legendary barber and woodcutter Elijah Pierce. Kamau opened the Kojo Photo Art Studio in 1978 with his late wife, Mary Ann Williams. Williams was the host of WOSU’s TV program “Afromation.” On the set, Kamau was able to photograph many local and national celebrities. Disturbed by the negative images of African Americans in the ‘60s and ‘70s, he used his photography to show positive images of African Americans and people of the African Diaspora. Kamau first travelled to Africa in 1978, and has made eleven subsequent trips. In 1979, Kamau and Williams established the Art for Community Expression (ACE) non-profit venture to help promote African American artists. ACE was also able to sponsor trips to Africa for three local artists. In 1986, ACE opened its own gallery in Columbus, Ohio. Kamau retired from his position as chief medical photographer at the Ohio State University in 1994 and became a photography instructor at Columbus State Community College in 1997. Kamau published a book of photographs, entitled Columbus Remembered in 2006. Three years later, the Columbus Museum of Art celebrated Kamau’s seventieth birthday with an exhibition entitled, “Kojo: Fifty Years of Photography.” Kamau’s photographs are in the permanent collections of the Columbus Museum of Art, Columbus Metropolitan Library and the Columbus Foundation. His photographs were exhibited throughout the United States, including the Indianapolis Art Center, Dillard University, Bowling Green State University, Northern Kentucky University, Ohio Wesleyan University, Akron University, Ohio University, the Chicago Center of Science and Industry and the Art Institute of Pittsburgh. His work was also exhibited internationally at the Gallery 44 Center for Contemporary photography in Toronto, Canada; during Culturefest ‘93 in Abidjan, Cote d’Ivoire, West Africa; and the Central Bank of the Bahamas in Nassau, Bahamas.

Kamau was recognized numerous times for his photography and commitment to the community. He received the 2006 Ohioanna Library Career Award and the 2004 Columbus Winterfair Award of Excellence. Kamau was a member of the Columbus Museum of Art and Ohio Designer Craftsmen. He lived in Columbus, Ohio.

Kojo Kamau was interviewed by The HistoryMakers on April 5, 2012.

See how Kojo Kamau is related to other HistoryMakers
Click Here To Explore The Archive Today!