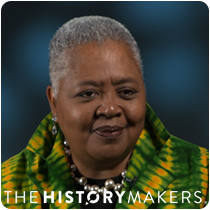 Museum director Kinshasha Holman Conwill was born on April 11, 1951 in Atlanta, Georgia to Moses Carol Holman and Mariella Ukina Ama Holman. She graduated from Mount Holyoke College in South Hadley, Massachusetts as a National Achievement Scholar, and received her B.F.A degree from Howard University in Washington, D.C. in 1973, and her M.B.A. degree from the University of California, Los Angeles in Los Angeles, California in 1980.

In Los Angeles, Conwill worked as an arts educator and activities coordinator for the Frank Lloyd Wright Hollyhock House for several years. In 1980, Conwill became the deputy director of the Studio Museum in Harlem, and served in that position for eleven years. Conwill then became senior policy advisor for the Museums and Community Initiative of the American Association of Museums, and also served as the director for the New York City Creative Communities Leveraging Investments in Creativity program. She was exhibit coordinator for the Museum of the American Indian in New York City. Conwill also worked as project director for the New York City Creative Communities program of LINC (Leveraging Investments in Creativity), project director and managing editor for Culture Counts: Strategies for a More Vibrant Cultural Life for New York City (New York Foundation for the Arts), and project manager for Creative Downtown: The Role of Culture in Rebuilding Lower Manhattan (New York City Arts Coalition). In 2005, Conwill was appointed as deputy director of the Smithsonian’s National Museum of African American History and Culture in Washington D.C. In this role, Conwill engaged in fundraising campaigns, expanded the museum’s collections, developed exhibits and programming, and supervised the museum’s publishing activities.

Conwill has also published two books; Ain’t Nothing Like the Real Thing: How the Apollo Theater Shaped American Entertainment co-authored by Richard Carlin, and Dream A World Anew: The African American Experience and the Shaping of America with the National Museum of African American History and Culture.

Conwill served as a board member for numerous organizations, including the Provisions Library in Washington D.C., the Andy Warhol Foundation for the Visual Arts, the Municipal Art Society of New York, and the Rockefeller Foundation. She has also served on the management panel for the Pew Center for Arts and Heritage, and as an advisor for the Harvard University Program for Art Museum Directors.

Kinshasha Holman Conwill was interviewed by TheHistoryMakers on November 2, 2017.