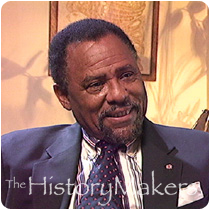 "Whatever thy hand findeth to do, do it with thy might."

Author and lifelong educator King Virgil Cheek was born on May 26, 1937, in Weldon, North Carolina. His father was a Baptist minister and his mother was the first black female insurance broker in North Carolina. He attended Washington Street Elementary School and became a child evangelist at twelve years old while attending Lincoln Junior High. Cheek received his high school diploma from Dudley High School in Greensboro in 1955, where he was a member of the debate team.

Recruited by his mentor, Dr. Benjamin Mayes, he attended Bates College in Lewiston, Maine, and earned his bachelor of arts degree in economics in 1959. He went on to earn his master’s degree from the University of Chicago in 1967. Cheek earned his law degree from the University of Chicago in 1969. He was active in the civil rights movement, participating in the March on Washington and passed up a number of lucrative offers to practice law and chose instead to teach at a Black college in the South.

At the age of twenty-seven, Cheek became a college dean and vice president at Shaw University, a post he held until 1969, when he was appointed president. Cheek served as president at Shaw University until 1971. That year, Cheek was named president of Morgan State University in Baltimore, Maryland, where he remained until 1974. From 1974 through 1976, he was the vice president of the Union for Experimenting Colleges and Universities; Cheek served as president of the organization from 1976-1978. His focus then shifted to leadership development; along with a colleague they developed the Center for Leadership and Career Development in Washington, D.C., in 1978. From 1985 until 1996, Cheek served in a number of posts at the New York Institute of Technology including social sciences professor, dean of graduate studies and vice president of academic affairs.

From 2001 until 2003, Cheek served as the chancellor of the New York College of Health Professionals. He is the author of numerous books, chapters and articles including The Quadrasoul four novels that explore four dimensions of the human spirit. He is also the recipient of innumerable awards and honors. Cheek is currently in the process of launching a new non-traditional medical school in Switzerland, the United Kingdom, China and South Africa. The “College of Integrated Medicine” will combine traditional western medicine with a holistic approach. The schools are scheduled to open in September 2005.

Cheek was interviewed by The HistoryMakers on June 14, 2004.