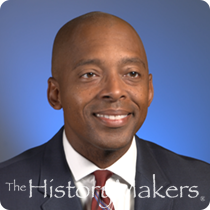 Historian Khalil Gibran Muhammad was born on April 27, 1972 in Chicago, Illinois to Ozier Muhammad and Kimberly Muhammad-Earl. He completed his B.A. degree in economics at the University of Pennsylvania in 1993, and his Ph.D. degree in history at Rutgers University in 2004.

Initially intending to work in finance, Muhammad worked at Deloitte-Touche for almost two years before beginning his Ph.D. work in history. Following his graduation from Rutgers University in 2004, Muhammad worked as an Andrew W. Mellon Postdoctoral Fellow at the Vera Institute of Justice for two years. He then joined the faculty of Indiana University in Bloomington as an associate professor of history, where he taught for five years, focusing his teaching and research on the ideas of black criminality following the American Civil War. In 2011, Muhammad was selected as the next director of the Schomburg Center for Research in Black Culture in Harlem. While there, Muhammad sought to expand the center’s outreach and funding, focusing particularly on programming to attract younger audiences. In late 2015, Muhammad announced he was leaving the Schomburg Center to join the faculty of Harvard’s Kennedy School as professor of history, race, and public policy. He was also hired as the Suzanne Young Murray Professor at the Radcliffe Institute for Advanced Study.

Muhammad released The Condemnation of Blackness: Race, Crime, and the Making of Modern Urban America in 2010, which was awarded the John Hope Franklin Publication Prize from the American Studies Association in 2011. Since its publication, he is a frequent contributor on the topic, including an interview with Bill Moyers in 2012 and 2016. Muhammad also delivered lectures at the City University of New York, Rutgers University, Indiana University, and many others. Muhammad’s commentary on the racial past of the United States and contemporary policing and criminality was published in the New York Times, Washington Post, National Public Radio and others. While under his direction in 2015, the Schomburg Center won the National Medal for Museum and Library Service.

Khalil Gibran Muhammad was interviewed by The HistoryMakers on September 1, 2016.

See how Khalil Gibran Muhammad is related to other HistoryMakers
Donate Now
Click Here To Explore The Archive Today!