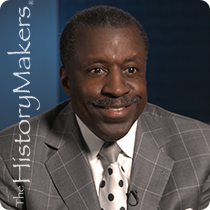 Favorite Color:
Red
Favorite Food:
Fish
Favorite Time of Year:
Summer
Favorite Vacation Spot:
Cruising
Favorite Quote:
Do all you can and then some.

Favorite Color:
Red
Favorite Food:
Fish
Favorite Time of Year:
Summer
Favorite Vacation Spot:
Cruising
Favorite Quote:
Do all you can and then some.

See how Kevin Shurn is related to other HistoryMakers

In 1974, Shurn began his career as a draftsman for Zurheide-Herrmann Consultant Engineers Company. He then accepted a design and draftsman position at Fulton Iron Works, designing punch presses. In 1976, he became assistant sales manager at Fulton Iron Works and attended his first trade show, the International Machine Tool Show in Chicago, Illinois. Shurn was later promoted to manager of contract manufacturing in 1979, before he was hired at I.W. Industries in Kentucky in 1983. In the same year, he also incorporated his own business, Shurn and Associates. In 1988, he founded Superior Maintenance Company (SMC), and then in 1990, he attended Toyota Motor Corporation’s first Opportunity Exchange Program. By 1993, Superior Maintenance Company partnered with Toyota Motors, first supplying janitorial services to Toyota and then to provide Toyota’s die manufacturing equipment in Georgetown, Kentucky; Erlanger, Kentucky; Princeton, Indiana and San Antonio, Texas. In 2017, his company was awarded part of the Toyota’s North American headquarters facility in Plano, Texas.

Shurn has been featured in MBE magazine, Fortune, Black Enterprise and Ebony magazine.

Shurn was active in numerous state and local organizations, as a member of the Elizabethtown Rotary Club having served as president and assistant district governor. He was a Paul Harris Fellow and served on the Advisory Board of Republic Bank & Trust Company, the Vaughn Reno Starks Community Center and Big Brothers Big Sisters, the Kentucky Chamber of Commerce, North Central Educational Foundation and Board of Trustees of The DePaul School. Shurn was a Bingham Fellows 2009 graduate and served on the University of Louisville Board of Overseers. Shurn was appointed by the Governor of Kentucky to the Kentucky Workforce Investment Board.

Kevin Shurn was interviewed by The HistoryMakers on August 13, 2017.

See how Kevin Shurn is related to other HistoryMakers