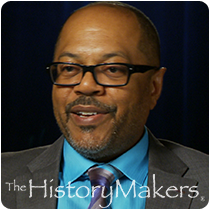 See how Kevin Merida is related to other HistoryMakers

Journalist and author Kevin Merida was born in 1957 in Wichita, Kansas, and grew up in the Washington, D.C. area. Merida received his B.S. degree in journalism in 1979 from Boston University, where he was also editor of the student newspaper Blackfolk. He went on to graduate from the Summer Program for Minority Journalists at the University of California at Berkeley.

In 1979, Merida was hired as a general assignments reporter and rotating city desk editor for The Milwaukee Journal. From 1983 to 1993, he worked for The Dallas Morning News, where he served as a special projects reporter, local political writer, national reporter, White House correspondent and assistant managing editor in charge of foreign and national news coverage. Merida was then hired by The Washington Post in 1993, where he first covered Congress. He joined the paper’s national political reporting team to cover the 1996 presidential campaign; and joined the Style section staff in 1997. Merida was promoted to associate editor in 2001, and was appointed national editor in 2008. From 2001 to 2004, he wrote the column, "Side Streets," which was syndicated by The Washington Post Writers Group. In 2013, Merida was named the first African American managing editor of The Washington Post.

Merida co-authored the 2007 biography Supreme Discomfort: The Divided Soul of Clarence Thomas, which was awarded the nonfiction prize at the inaugural Essence Literary Awards. He also co-authored 2008’s Obama: The Historic Campaign in Photographs, and was editor of Being a Black Man: At the Corner of Progress and Peril, a collection of Washington Post essays written in 2006. In addition, Merida has taught journalism at Marquette University and in Boston University’s Washington journalism program. He was a public policy scholar with the Woodrow Wilson International Center for Scholars, and has served on the Robert F. Kennedy Journalism Awards board.

Merida has won a number of awards, including a 2006 Vernon Jarrett Medal for feature writing; a 2005 Distinguished Alumni Award from Boston University’s College of Journalism; and a first place commentary prize in 2003 from the National Association of Black Journalists. He was named NABJ’s “Journalist of the Year” in 2000, and was a Pulitzer Prize finalist in 1990.

Merida lives in Silver Spring, Maryland with his wife, author and commentator Donna Britt. They have three sons.

Kevin Merida was interviewed by The HistoryMakers on January 31, 2014.

See how Kevin Merida is related to other HistoryMakers