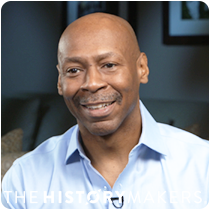 Favorite Color:
Blue and Sunset
Favorite Food:
Any plant-based food
Favorite Time of Year:
Summer
Favorite Vacation Spot:
Anywhere Tropical
Favorite Quote:
You're Beautiful All You Have To Do Is Stop Trying To Be.

Favorite Color:
Blue and Sunset
Favorite Food:
Any plant-based food
Favorite Time of Year:
Summer
Favorite Vacation Spot:
Anywhere Tropical
Favorite Quote:
You're Beautiful All You Have To Do Is Stop Trying To Be.

See how Kevin Eubanks is related to other HistoryMakers
Donate Now

Jazz musician Kevin Eubanks was born on November 15, 1957 in Philadelphia, Pennsylvania to Vera Bryant Eubanks, a gospel and classical pianist and music teacher, and William Eubanks, a police officer and security manager for AT&T. As a young child, Eubanks was trained in piano and violin at the Settlement Music School in Philadelphia. He also studied jazz guitar with Ted Dunbar at Rutgers University. After graduating from Germantown High School in 1976, Eubanks earned his B.A. degree in composition from the Berklee College of Music in Boston, Massachusetts in 1979.

Upon moving to New York City to pursue a career in music, Eubanks joined Art Blakey’s band, the Jazz Messengers, and started his own group, the Kevin Eubanks Quartet. In 1983, Eubanks released his first record, Guitarist, with Elektra Records, and the following year, he released his second album, Sundance, with GRP Records. Eubanks went on to release several albums with the label, including Opening Night in 1985, Face to Face in 1986, The Heat of Heat in 1987, Show Prophets in 1988, The Searcher in 1989, and Promise of Tomorrow in 1990. In 1992, Eubanks moved to Los Angeles to play as the guitarist on The Tonight Show with Jay Leno. He released several additional albums with Blue Note Records, including Spirit Talk in 1993 and Live at Bradley in 1994. From 1995 to 2010, Eubanks was the band director of The Tonight Show’s band. He also signed with Insoul Records and released the albums Shine in 2002 and Slow Freight in 2003. After leaving The Tonight Show in 2010, Eubanks became the artistic director for the Thelonious Monk Institute's Jazz in the Classroom Program. With Mack Avenue Records, he recorded and released the albums Zen Food in 2010, The Messenger in 2012, and East West Time Line in 2017. Eubanks has recorded with jazz singers like Dianne Reeves, Terri Lyne Carrington, and Carmen Lundy.

Eubanks was an active member of the Artistic Advisory Panel of the BMI Foundation since 1999. He received an honorary doctorate degree from Berklee College of Music in 2006. In 2010, Eubanks was inducted into the Philadelphia Music Alliance’s Walk of Fame; and in 2014, he was awarded the Mark Twain Prize from PBS for his work on The Tonight Show.

Kevin Eubanks was interviewed by The HistoryMakers on March 19, 2018.

See how Kevin Eubanks is related to other HistoryMakers
Donate Now