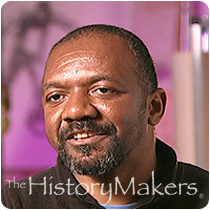 Born October 17, 1955, in Birmingham, Alabama, Kerry James Marshall realized that he wanted to be an artist at a very early age. Inspired by pictures in a book, Marshall decided he wanted to be a visual artist.

Themes and ideas present in Marshall's work reflect the complex web of personal and social issues that have been instrumental in molding his life. When Marshall was eight, his family moved to the Watts community in Los Angeles, California. As the epicenter of intense struggle for civil rights, including a riot in 1965 and a confrontation between city police officers and the Black Panthers, Watts and its imagery have dramatically influenced the form and content of Marshall's work. His celebrated series, "The Garden Project", critiqued low-income housing projects whose names denoted an idyllic Eden-like world, camouflaging the poverty and violence within.

Marshall received his training from the incomparable Charles White while enrolled at the Otis Art Institute in Los Angeles. Best known for his stylized, large-scale paintings depicting the beauty and complexity of African American life, Marshall also designs sculpture and has served as a production designer for such films as Daughters of the Dust (1989) and the Hendrix Project (1991).

With ground-breaking shows at the Art Institute of Chicago, the Berlinische Galerie, Berlin and the Jack Shainman Gallery in New York City, Marshall's childhood dreams have been realized. He recently was named the recipient of the prestigious MacArthur "Genius" grant and his work has become incorporated into the permanent collections of many museums across the nation. Marshall is currently an art professor at the University of Illinois, Chicago.

See how Kerry James Marshall is related to other HistoryMakers
Donate Now
Click Here To Explore The Archive Today! 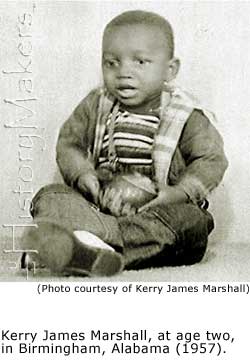 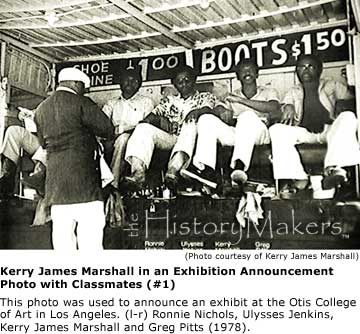