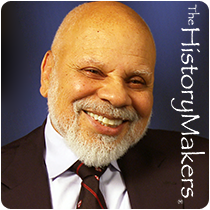 See how Kenneth Standard is related to other HistoryMakers
Donate Now

Lawyer Kenneth G. Standard is a prominent lawyer and diversity activist. As a child, civil rights activism was an important part of his family life; his elder sister worked for the national office of the NAACP, and from a young age he heard about and met NAACP lawyers like Thurgood Marshall and Charles Hamilton Houston. Standard graduated from Harvard University with his A.B. degree, and went on to receive his LL.B. degree from Harvard School of Law in 1962.

In 1967, Standard was hired as an attorney with the Bristol-Myers pharmaceutical company. In 1968, he was promoted to counsel of the products division; by 1970, he had been promoted again to become the division’s vice president. Standard continued his legal education, receiving his LL.M. degree from New York University’s School of Law in 1971. In 1988, he began working at the Consolidated Edison Company (Con Ed) as the assistant general counsel for labor relations. In 1999, Standard joined the law firm Morgan, Lewis & Bockius, where he served as special counsel. From 2004 to 2005, he served as president of the New York State Bar Association, and focused on increasing diversity within the legal field. In 2004, Standard joined the law firm of Epstein, Becker & Green as a member in its National Labor & Employment Practice. During this time, he also developed and chaired the firm’s nationwide diversity committee.

In 2006, the New York State Bar Association created the Kenneth G. Standard Internship program in his honor, which is specifically designed to support law students from a diverse range of backgrounds. In 2011, Standard received the American Bar Association’s Alexander Award for Lifetime Achievement in Pipeline Diversity; and, in 2013, he was elected fellow by the College of Labor and Employment Lawyers.

Standard and his late wife, Valerie Ann Salmon, have a daughter, Alison, and two sons, Devin and Trevor.

Kenneth Standard was interviewed by The HistoryMakers on January 14, 2014.

See how Kenneth Standard is related to other HistoryMakers
Donate Now
Click Here To Explore The Archive Today!