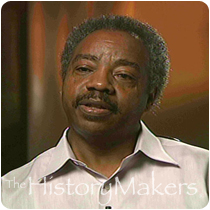 See how Kenneth G. Rodgers is related to other HistoryMakers

Rodgers’ academic career progressed in 1974 when he was named director of the art program at Voorhees College. Leaving Voorhees in 1977, he assumed the position of assistant professor of art at the University of Maryland Eastern Shore. In 1984, Rodgers began the "Art of the Modern World" series in Ocean City, Maryland. In 1990, he joined the Maryland Commission on African American History and Culture and was charged with conserving, promoting and interpreting the history of black Marylanders and became chairman of the commission in 1993. As chairman, he supervised the Banneker-Douglass Museum in Annapolis, Maryland. Also in 1993, Rodgers was named associate professor of African American Art History at the University of Maryland, Eastern Shore and was also named Artist-in-Residence at Mesa State College in Colorado.

In 1996, Rodgers became director of the North Carolina Central University Art Museum, which houses the largest collection of African American art in the state. In this capacity, Rodgers served as organizer and curator of several high profile exhibits including Edward Mitchell Bannister: American Landscape Artist, Re-connecting Roots: The Silver Anniversary Alumni Invitational, Charles White: American Draughtsman, Elizabeth Catlett: Master Printmaker and William H. Johnson: Revisiting an African American Modernist. In 2006, Rodgers was named Professor of Art and Director of the North Carolina University Art Museum. He has published several art compilations including William H. Johnson: Revisiting an African American Modernist and Climbing Up the Mountain: The Modern Art of Malvin Gray Johnson. Rodgers painted the official portrait of the first African American member of the North Carolina Council of State and the first African American State Auditor for North Carolina, Ralph Campbell. Rodgers has received numerous research grants and awards including: a National Endowment for the Humanities for study at the Vatican Museums and the American Academy in Rome, a Fulbright-Hays Study Abroad award for research in Kenya and Tanzania, and grants from the North Carolina Arts Council, the National Endowment for the Arts, the Duke-Semans Fine Arts Foundation, and the Rockefeller Foundation to support museum exhibitions and programs.

Rodgers is the father of two and lives in North Carolina with his wife, Shielda Glover Rodgers.

Kenneth Rodgers was interviewed by The HistoryMakers on June 22, 2007.

See how Kenneth G. Rodgers is related to other HistoryMakers
Click Here To Explore The Archive Today!