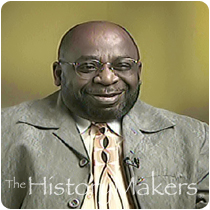 See how Kenneth D. Rodgers is related to other HistoryMakers
Donate Now

Civic minded mechanical engineer, Kenneth D. Rodgers was born September 20, 1951 in Lansing, Michigan. With family roots in Mississippi, his parents, Joe and Irene Rodgers were members of Paradise Baptist Church. As a child, Rodgers was mentored by Art Jones of the National Society of Civil Engineers. Attending Allen Street Elementary School, West Junior High School, Rodgers improved his grades and graduated from Sexton High School in 1969. At the University of Detroit, Rodgers instituted New Dawn, a youth enrichment project. He graduated with a B.S. degree in mechanical engineering in 1975 and earned a master’s in mechanical engineering from Northwestern University in 2002.

Starting as a schoolteacher, Rodgers was hired as an engineer for Goodyear in Lansing. Moving to Reading, Pennsylvania in 1978, he started a youth chapter, and became president of the NAACP. He also set up a program called Brothers and Sisters. In 1982, Rodgers moved to the Chicago area. Youth Action Ministries (YAM) was founded by Reverend Hycel B. Taylor at Second Baptist Church in Evanston, Illinois that same year. Rodgers became volunteer executive director for YAM shortly thereafter. Programs instituted by Rodgers include: youth mentoring, tutoring, and self esteem workshops. Since 1989, YAM has offered an annual college tour highlighting historically Black colleges and universities. Through the EdgeUp project, Rodgers introduces students to engineering.

A member of the Evanston Zoning Board, the Coalition for the Improvement of Education in South Shore, Rodgers also serves on the boards of the Chicago Children’s Museum and the Children’s Defense Program. He works as an engineer for Greely Hanson in Chicago and is vice president of the National Society of Black Engineers. Honored for his community service, Rodgers is a popular motivational speaker.

See how Kenneth D. Rodgers is related to other HistoryMakers
Donate Now
Click Here To Explore The Archive Today!