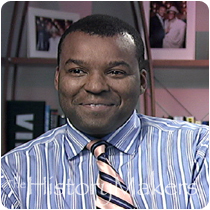 See how Kenard E. Gibbs is related to other HistoryMakers
Donate Now

Businessman and producer Kenard Gibbs was born August 1, 1964, in Chicago, Illinois. His parents were educators who both graduated from Mississippi’s Tougaloo College. Gibbs attended Our Lady of Hungary Elementary School and was a regular at the South Chicago YMCA. Gibbs was involved in the Links Unlimited Program when he graduated from St. Ignatius High School in 1982. Links introduced him to Williams College in Williamstown, Massachusetts. At Williams, Gibbs was introduced to some the top business families in the country. He graduated with a B.A. in political economy in 1986.

Gibbs moved back to Chicago and was employed by Northern Trust Bank through 1990. From 1990 to 1994, he worked for Leo Burnett Advertising Agency, where he was mentored by Mike Hall. During this period Gibbs earned a master’s degree in marketing and finance from Northwestern University’s Kellogg Graduate School of Management. As a client service executive at Leo Burnett, Gibbs was involved in the development of advertising campaigns and retail advertising strategies for brands such as Marlboro, Miller Beer and Sealy Posturpedic. Meanwhile, he helped with Keith Clinkscales’ Urban Profiles magazine, and in 1993, started his career at Vibe magazine, a brainchild of Quincy Jones, as Midwest sales director. Gibbs left Vibe in 1998 to become an agency principal with TMP Worldwide, an executive-search firm (monster.com). He returned to Vibe in June of 2000 as president, where he was instrumental in the strategic positioning and growth of management and oversees the advertising, event marketing and public relations departments.

At Vibe, the leading urban music magazine in America, Gibbs spearheaded efforts to expand beyond the medium of print to wireless and broadcast. He served as executive producer for Weekend Vibe, a syndicated weekly television show produced by the Heritage Networks. He also served as executive producer for the inaugural Vibe Awards, a two-hour, prime time special on the UPN Network in 2004.

Gibbs lives with his wife and children in New York City.

See how Kenard E. Gibbs is related to other HistoryMakers
Donate Now
Click Here To Explore The Archive Today!