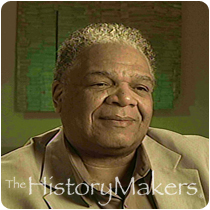 See how Ken Page is related to other HistoryMakers

Actor Ken Page was born on January 20, 1954 in St. Louis, Missouri. He was raised by his mother and step-father, Gloria and Garvin Gilstrap. As a youth, he attended St. Louis’ St. Bridget of Erin and St. Nicholas Elementary Schools. While attending St. Nicholas, Page was inspired by the founder of the school’s speech club, Sister Ruth Cecilia, and his older cousin to pursue a career in theater. In 1973, he graduated from Bishop Dubourg High School where he received special training in theatrical arts.

In 1973, Ken Page received a full scholarship to attend Fontbonne College located in Clayton, Missouri where he majored in theater. While attending Fontbonne College, he was cast in his first paid role as “Stewpot” in a theatrical production of South Pacific, a musical that featured Frank Sutton, Mary Travers, and Theresa Merrit. A year later, Page moved to New York, where he began working with the Fanfare Children’s Ensemble. While performing with the Fanfare Children's Ensemble, he made appearances as Jim in a production of Huck Finn. He also worked with the Amas Repertory Theatre and the Henry Street Settlement, starring in the musicals Ragtime Blues and Louis.

Ken Page made his Broadway debut in 1976 starring in an all black revival of Guys and Dolls. Then in 1977, he played the role of the Lion in the hit musical The Wiz. In 1978, Page would later go on to be featured as an original cast member in the Fats Waller musical revue Ain’t Misbehavin’ and was subsequently awarded the Drama Desk Award for his performance. He would later duplicate this performance in an NBC television special and in Paris, France. In 1982, Page originated the role of Old Deuteronomy in the Broadway production of Cats and repeated his performance in a PBS version of the play. During the 1980s, Page made appearances in several films and television sitcoms including Gimme A Break (1984); Sable (1987); Torch Song Trilogy (1988) and Polly (1989). He continued his work in the entertainment industry during the 1990s and was hired to appear in such television shows as Family Matters (1990); South Central (1994) and Touched By An Angel (1995). In 2000, Page starred in the Broadway show Ain’t Nothin’ But The Blues, and in 2006, he was hired as cast member in the musical film DreamGirls .

Ken Page was interviewed by The HistoryMakers on April 4, 2008.

See how Ken Page is related to other HistoryMakers
Click Here To Explore The Archive Today!