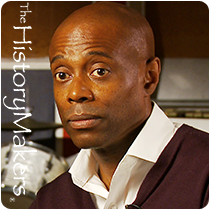 See how KEM is related to other HistoryMakers

R & B singer and songwriter Kim Lamont Owens (KEM) was born in Nashville, Tennessee. When he was young, his family moved from Nashville to the Detroit suburb of Southfield, Michigan. Owens began to explore the keyboard when he was four, and became fascinated by music in high school in the 1980s. However, upon graduation, he dealt with homelessness, addiction, and isolation from his family. Owens recovered in 1990 and took a job as a waiter at the Ritz-Carlton Hotel in Dearborn, Michigan. He also booked weddings and other shows that allowed him to perform original music.

In February of 2001, Owens self-released his first album, Kemistry, which sold nearly 15,000 copies and piqued the interest of Motown Records. Motown signed Owens to a five-record deal in November of 2001 and re-released Kemistry in 2003. The album reached the Top 20 of the Top Hip-Hop/R&B Albums chart, its first single, "Love Calls," became a hit, and the record went gold. Owens’ second CD, Album II, was released in 2005 and sold over 500,000 copies in the United States. The album included the hit single "I Can't Stop Loving You," a #1 at urban adult contemporary radio. In 2010, he released his third album, Intimacy, which debuted at #2 on the Billboard Top 200 Albums chart. The record’s first single, “Why Would You Stay,” spent several weeks at #1 on the Urban AC Radio charts. Owens went on to produce a Christmas album entitled What Christmas Means in 2012, and then a follow-up deluxe edition of the CD in October of 2013.

In 2012, Owens established Mack & Third, Inc., a non-profit organization dedicated to assisting the homeless by gathering food and raising funds for Detroit’s shelters and food banks. He also presents the annual ‘Mack & Third’ event, an all-day free concert to benefit and recognize the city’s homeless citizens.

Owens won the Billboard Music Award for Top Adult R&B Single of the Year in 2005, and was nominated for two NAACP Image Awards in 2006. He was also nominated in 2010 for a Soul Train Award for Best Male R&B/Soul Artist; two Grammy Awards for Best Male R&B Vocal Performance and Best R&B Song; and the BET Centric Award. Owens was nominated four more times at the 44th NAACP Image Awards in 2013.

Kem was interviewed by The HistoryMakers on June 23, 2014.

See how KEM is related to other HistoryMakers
Click Here To Explore The Archive Today!