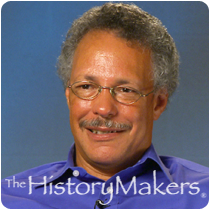 Favorite Color:
Blue
Favorite Food:
Oranges
Favorite Time of Year:
April
Favorite Vacation Spot:
Paris, France
Favorite Quote:
In Physics, We Don't Teach You What To Think. We Teach You How To Think.

Favorite Color:
Blue
Favorite Food:
Oranges
Favorite Time of Year:
April
Favorite Vacation Spot:
Paris, France
Favorite Quote:
In Physics, We Don't Teach You What To Think. We Teach You How To Think.

See how Keith Jackson is related to other HistoryMakers
Donate Now

Physicist Keith Hunter Jackson was born on September 24, 1953 in Columbus, Ohio to Gloria and Russell Jackson. He earned two B.S. degrees, one in physics from Morehouse College and one in electrical engineering from the Georgia Institute of Technology. Jackson then moved to California where he obtained his M.S. and Ph.D. degrees from Stanford University in 1979 and 1982, respectively.

After obtaining his graduate degrees, Jackson began working for Hewlett Packard Laboratories. He became a member of the Gate Dielectric group and developed techniques to create thin nitride films on silicon layers. In 1983, he served as a professor at Howard University, working in the Solid State Electronics group. Beginning in 1988, Jackson worked for Rockwell International (now Boeing) in the Rocketdyne division where under the Strategic Defense Initiative (SDI) program he performed research on diamond thin films, high powered chemical and Free Electron Lasers (FEL) and water-cooled optics. In 1992, Jackson began working for the Lawrence Berkeley National Laboratory as associate director of the Center for X-Ray Optics (CXRO). His research interests were in the Extreme Ultra-Violet (EVU) lithography, x-ray lithography, electroplating and injection molding. EUV lithography is the technology, which is used to build billions of nano-sized devices for use in computers and cell phones. X-ray lithography and molding is used to build micro-sized mechanical devices like micropumps, and tiny mirrors for large screen projection TV’s. In 2005, Jackson became Vice President of Research and Professor of Physics at Florida Agricultural and Mechanical University (FAMU). On January 4th 2010, Jackson moved to Baltimore, Maryland and joined the faculty of Morgan State University as Chair of the Department of Physics.

Jackson served as president of the National Society of Black Physicists (NSBP) from 2001 to 2006. He is also a fellow of the National Society of Black Physicists and the African Scientific Institute. In 2004, Jackson was selected as one of the 50 Most Important African Americans in Technology by U.S. Black Engineer and Information Technology. In addition to his published papers, Jackson has written pieces on minority physicists including “Utilization of African American Physicists in the Science & Engineering Workforce” and “The Status of the African American Physicist in the Department of Energy National Laboratories.”

See how Keith Jackson is related to other HistoryMakers
Donate Now
Click Here To Explore The Archive Today!