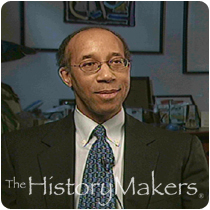 See how Keith H. Williamson is related to other HistoryMakers
Donate Now

Keith Harvey Williamson, president of Pitney Bowes Capital Services Division, was born May 16, 1952, in St. Louis, Missouri. Williamson’s father, Irving A. Williamson, was a journalist and photographer for St. Louis based newspapers, such as the Argus, the Mirror, and the Sentinel. Attending Harrison Elementary School and Walnut Park Gifted School, Williamson graduated in 1970 from Thomas Jefferson High School in St. Louis, Missouri, after spending the summer after his junior year in Europe. Williamson earned his B.A. degree in economics and sociology from Brown University in 1974, and a combined M.B.A. and J.D. degree from Harvard University in 1978. Later Williamson would obtain his LL.M. degree in taxation from New York University.

In 1978, Williamson worked as a tax lawyer with the Washington, D.C., based firm Covington & Burling, and in 1981, he joined Revis & McGrath (later named Fulbright Jaworski). Pitney Bowes hired Williamson as director of tax in 1988; he later worked for the company as assistant general counsel for financial services, and deputy general counsel for mergers. In 1999 Williamson became president of the capital services division of Pitney Bowes; in 2002, he was chosen by Fortune magazine as one of the fifty most powerful African American executives. Williamson became the senior vice president, general counsel, and company secretary of Centene Corporation in 2006.

A member of the Executive Leadership Council and the Urban League’s Black Executive Exchange Program, Williamson, his wife Addie, and their daughter reside in suburban Connecticut.

See how Keith H. Williamson is related to other HistoryMakers
Donate Now
Click Here To Explore The Archive Today!