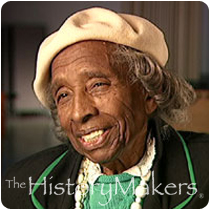 "Help Me Through This Day."

Civic leader Katie Booth was born on May 23, 1907 in Gulfport, Mississippi to Joseph Patterson and Ida Coffye. Booth attended school up to the eighth grade in one room at her church. She was able to experience school with classrooms and sports teams for the first time at 33rd Street High School in Gulfport, Mississippi. In 1929, Booth graduated from high school and the Presbyterian Board of Education sent her as a work student to be trained in education at Arkadelphia Academy in Arkansas for ten years. She next attended Philander Smith College in Little Rock, Arkansas, where she studied general chemistry and graduated in 1940.

At the outbreak of World War II, Booth moved north to Chicago to work in the war industry. She took a job as a chemist at a Doehler-Jarvis Company die casting plant. Booth started classes at the Illinois Institute of Technology while she was working. Despite being the only African American in her classes, she received her industrial chemistry degree and worked as an assistant chemist in the Department of Pharmacology at the Chicago Medical School, researching preventative health measures. She was keenly interested in children's health and prenatal care, and also worked on treatments for sickle cell anemia.

As a chemist and community activist, she fought for the rights of children with sickle cell anemia. Few women worked in chemistry at the time, making Booth a trailblazer in her field.

Outside of work, Booth was active civic leader on Chicago's West Side. Since the 1940s, she served as chairperson of the West Side YWCA, and held the position until after her professional retirement. Booth was also one of the first members of the Chicago Housing Board's West Side District, and served as chairperson of the board of Sears Roebuck for the West Side area. During the Civil Rights Movement, Booth worked with many notable people and organizations such as Albert Raby, Martin Luther King Jr., Jesse Jackson and Operation PUSH. She cautioned civil rights leaders against fragmenting following Dr. Martin Luther King, Jr.'s death. She worked at several voter registration drives starting in the 1960s. During the 1980s, Booth helped in a voter registration drive that led to the election of Harold Washington, Chicago's first black mayor.

She left Chicago in 1990 to move back to Gulfport, Mississippi to be with her ill sister. Booth lived in Magnolia Grove, the subdivision of Gulfport where she had been an original resident. She continued being a community activist in Mississippi. Staying active into her nineties, Booth worked to expand the Magnolia Grove Community Center and its children's programming. In recognition of her work, the facility was renamed the Katie Patterson Booth Community Center in May 2003.

Katie Booth was married during World War II to Robert Booth. Eight years later he died from his war injuries. They had no children.