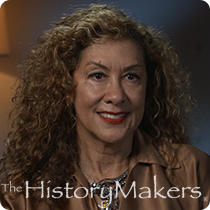 See how Kathleen McGhee-Anderson is related to other HistoryMakers

Producer Kathleen McGhee-Anderson was born on June 11, 1950 in San Antonio, Texas to Christine McGhee and Reginald McGhee. McGhee-Anderson earned her B.A. degree in English from Spelman College in 1972. She then received her M.F.A. degree in film directing and criticism from Columbia University in 1974.

From 1974 to 1980, McGhee-Anderson worked as a film editor at WMAL-TV in Washington, D.C. and KABC-TV in Los Angeles, California. While in Washington, D.C., she also spent a year as an assistant professor of film at Howard University. In 1980, McGhee-Anderson joined the Warner Brothers Women and Minority Writers Workshop and her work was brought to the attention of Michael Landon. She then began writing episodes for Little House on the Prairie, Gimme a Break!, 227, Amen, and The Cosby Show. McGhee-Anderson’s television credits also include Touched by an Angel, Any Day Now, and The Fosters. While at Warner Brothers, McGhee-Anderson served as an executive producer as well. She was a producer for the fifth season of Soul Food, for four seasons of Lincoln Heights, and the second season of Greenleaf. McGhee-Anderson was involved in writing for films and theater productions as well. Her films include Sunset Park and The Color of Courage, which dealt with her grandparents’ landmark U.S. Supreme Court cases. McGhee-Anderson’s writings for stage productions were done in collaboration with The Crossroads Theatre Company, The Vineyard Playhouse, and L.A. Theater Works. Her stage productions include Oak and Ivy, Freedom Riders, and Mothers.

McGhee-Anderson received an NAACP Image Award, the Ruby Slipper Award for Children’s Programming for her television drama, The Story of Blind Tom and was selected twice as a Eugene O’Neill Playwright by the Eugene O’Neill Theater Center. McGhee-Anderson was also the recipient of an honorary doctorate of fine arts from her alma mater, Spelman College.

Kathleen McGhee-Anderson was interviewed by The HistoryMakers on August 18, 2017.

See how Kathleen McGhee-Anderson is related to other HistoryMakers