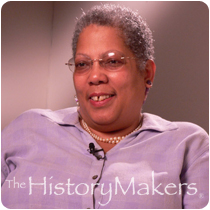 Favorite Color:
Purple
Favorite Food:
Crab (Chesapeake Bay)
Favorite Time of Year:
Summer
Favorite Vacation Spot:
Paris, France
Favorite Quote:
Just Because You're Paranoid, Does Not Mean They're Not Out To Get You.

Favorite Color:
Purple
Favorite Food:
Crab (Chesapeake Bay)
Favorite Time of Year:
Summer
Favorite Vacation Spot:
Paris, France
Favorite Quote:
Just Because You're Paranoid, Does Not Mean They're Not Out To Get You.

See how Kathleen E. Bethel is related to other HistoryMakers
Donate Now

African American studies librarian Kathleen Evonne Bethel has dedicated her career to developing a broad collection of African American resource materials at Northwestern University. A fourth generation Washingtonian, Bethel was born in the Washington, D.C., area on August 4, 1953, to Helen and Frederick Bethel. From a very early age, she knew that she wished to do “cultural work” for the African American community. After graduating from high school, Bethel received a scholarship from the National Bridge Association to attend Elmhurst College in Illinois. She received her B.A. degree in 1975 and began working for the Newberry Library in Chicago as a receptionist that same year. Bethel worked in this position for two years.

In 1977, Bethel earned her M.A. degree in library science from Rosary College, now Dominican University. She then received a position as branch librarian for the Maywood Public Library in Maywood, Illinois. The next year, Bethel took a position at Johnson Publishing Company, home to Ebony and Jet magazines, working as an assistant librarian for four years. In 1982, Bethel was hired to serve as Northwestern University’s African American Studies librarian. In this capacity, she is responsible for acquisition, maintenance and cataloguing of source materials on African American life and history for the university library system. Seven years later, Bethel earned her second M.A. degree, this time from Northwestern University.

Bethel has not limited her service in African American Studies to Northwestern University. In 1996, she received a Fulbright Library Fellowship to provide expertise and assistance to colleagues at the University of KwaZulu-Natal, and in 1999, she became a library fellow for the Alice Kaplan Institute for the Humanities in order to study African American museums. In 2001, Bethel traveled to Paris to participate in an international colloquium on African diasporas. She served on the Board of Trustees for the DuSable Museum of African American History from 1993 to 2007. She is also a member of the NAACP and the Association for the Study of African American Life and History (ASALH). She has served as a juror for the Black Caucus of the American Library Association Literary Award (BCALA) committee and is an official bibliographer for the Toni Morrison Society. Bethel publishes thematically based summer African American fiction and non-fiction reading lists annually and has also compiled bibliographies on W.E.B. DuBois, personal finance management for black women, and African American theatrical dramas.

See how Kathleen E. Bethel is related to other HistoryMakers
Donate Now
Click Here To Explore The Archive Today!