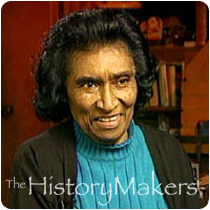 See how Kathleen Crosby is related to other HistoryMakers

Educator Kathleen "Kat" Crosby was born on March 9, 1925, in Winnsboro, South Carolina, to Beatrice Tucker and W.A. Ross. She graduated from Johnson C. Smith University in Charlotte, North Carolina, with a B.A. in 1946 and later earned her M.A. from Bank Street College in New York City in 1970.

Crosby began teaching in 1946 in the Charlotte-Mecklenburg School System. Aside from twenty years of experience as a classroom teacher, she served as an in-service specialist for early childhood education from 1967 to 1970. Crosby worked at length with Head Start programs and has offered her services as an education consultant at the university level. From 1970 to 1976, Crosby was principal of Billingsville Elementary School. There, she was hailed for her successful leadership in dealing with school desegregation and busing issues. A 1976 CBS television documentary highlighted her outstanding leadership of Billingsville Elementary School. In 1976, Crosby became an area assistant superintendent to the district, which comprised twenty-five schools. She retired as superintendent in 1986 after a successful forty-year career.

In 1970, Crosby was appointed to the Charlotte-Mecklenburg Charter Commission. An outspoken voice on desegregation, Crosby was named WBT Radio's Woman of the Year 1976. In 1977, she was appointed to the University of North Carolina Board of Governors. Crosby has served as vice president of the United Community Service Board and on the Community Relations Committee, the University of North Carolina's Board of Trustees, the Drug Education Board, WBT Radio's Black Advisory Board and the Board of Trustees for Johnson C. Smith University. In 1974, she was awarded the B'nai B'rith Women's Human Relations Award, and in 1975 she was inducted into the NAACP's Hall of Fame.

See how Kathleen Crosby is related to other HistoryMakers
Click Here To Explore The Archive Today!