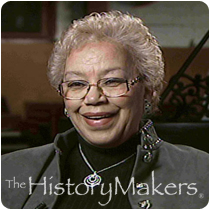 See how Katherine Schaffner is related to other HistoryMakers

Original member of the Marvelettes, Katherine Anderson Schaffner was born Katherine Elaine Anderson on January 16, 1944, in Ann Arbor, Michigan to Robert Timothy Calvin “T.C.”Anderson and Florence Smith Anderson. Raised in the Detroit suburb of Inkster’s Carver Homes, Schaffner attended Carver Elementary School, Ford Junior High School, Fellrath Junior High School and Inkster High School. At age seventeen, she was drafted as a back up singer for friends Gladys Horton and Georgia Dobbins for the Inkster High School talent show in 1961. Their group included Georgeanna Tillman and Wyanetta (often spelled “Juanita”) Cowart. The five teenagers called themselves the Casinyets for “Can’t Sing Yets.” They won fourth place, but with the help of their teacher, Shirley Sharpley, who knew Berry Gordy’s driver, Jon O’Den, they were able to land an audition with Motown Records. Motown’s featured stars in 1961 were Smokey Robinson and the Miracles and Mary Wells. Dobbins modified a William Garrett song for the group and the result was Please Mr. Postman. Impressed, Gordy signed them on 1961, renaming the group the Marvelettes.

Please Mr. Postman became the number one song in the nation after thirteen weeks. As a Marvelette, Schaffner received Motown training in voice, etiquette and fashion. Soon, the Marvelettes were touring with the Motown Review. They performed at Washington, D.C.’s Howard Theatre, Harlem’s Apollo Theatre, Chicago’s Regal Theatre and other African American and teen venues. The Marvelettes went on to record hit singles such as Playboy and Beachwood 4-5789, which became the most popular phone number in America. Supported by the songwriting talents of Brian Holland, Lamont Dozier, Marvin Gaye and Smokey Robinson, the Marvelettes were an essential female part of Gordy’s “sound of young America,” along with Martha Reeves and the Vandellas and The Supremes. During the 1960s, the Marvelettes recorded hit after hit, including Too Many Fish in the Sea in 1964, Don’t Mess with Bill in 1965, The Hunter Gets Captured by the Game in 1967, My Baby Must Be a Magician in 1968 and That’s How Heartaches are Made in 1969.

Schaffner, now retired from show business, is the mother of two adult children, Keisha and Kalaine Schaffner. She is also the grandmother of one grandson, Toure Schaffner.

Schaffner was interviewed by The HistoryMakers on March 5, 2007.

See how Katherine Schaffner is related to other HistoryMakers
Click Here To Explore The Archive Today!