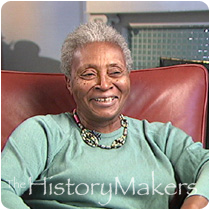 See how Katherine Jones is related to other HistoryMakers

Katherine Butler Jones was born on March 19, 1936, the only child of Meme, a hairdresser, and Theodore, a postal clerk. Jones grew up at 409 Edgecombe Avenue in Harlem’s Sugar Hill neighborhood, an address that W.E.B. DuBois, Walter White, Thurgood Marshall, and Madame St. Clair also called home. She graduated from Mount Holyoke College in 1957 with a B.A. in economics and sociology and married Hubie Jones later that year. After working as a teacher in the Boston Public Schools, Katherine became a mother to Karen in 1959. Daughters Lauren, Renee, Lisa, Cheryl, and Tanya, and sons Harlan and Hamilton would follow.

In 1961, she and her husband bought a home in Newton, Massachusetts, where only two realtors would show a house to a black family. They subsequently became active in the Newton Fair Housing and Equal Rights Committee. In 1964, Jones served as a founding director of the Roxbury/Newton Freedom School, an after-school program. In 1966, she founded the Newton Public Schools’ Metropolitan Council for Educational Opportunities (METCO) Program, which still enrolls students of color from Boston in Newton schools. She served as METCO’s director through 1976.

In 1967, Jones received her M.A. in urban education at Simmons College, and continued to promote integration by working for the Cambridge and Boston Public Schools during Boston’s turbulent desegregation efforts in the late 1970s. Jones was elected to the Newton School Committee in 1978 for the first of four terms, making history as the first successful African American candidate. In 1980, she earned her Ed.D. in administration and social policy from Harvard University.

In 1989, Jones discovered that black abolitionist Bishop Henry Highland Garnet had certified her great-great grandparents’ 1843 marriage. Upon further investigation, she found that her great-grandfather, Edward Weeks, brought slaves to Canada through an Underground Railroad station in the Adirondacks, where he had purchased land for a dollar from abolitionist Gerrit Smith. Edward named his homestead Timbucto, and John Brown moved to the area to support the settlers. Jones has shared this research in multiple museum exhibits and journal articles. In 1996, she received the New England PEN Discovery Author Award for her historical writing. In 2002, she co-authored The Civil Rights Movement in Newton, 1960-1980. Jones has also taught pedagogy and African American history at Simmons College, Wheelock College, and Boston University. She is currently working on her memoir, Deeper Roots: An American Odyssey. An excerpt, “409 Edgecombe Avenue, Baseball and Madame St. Clair,” was published in Herb Boyd’s The Harlem Reader in 2003 and inspired a play that was staged in Boston in 2004.

The Joneses live in Newton and have five grandchildren.

See how Katherine Jones is related to other HistoryMakers
Click Here To Explore The Archive Today!