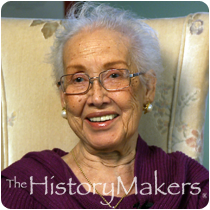 See how Katherine G. Johnson is related to other HistoryMakers

Mathematician and computer scientist Katherine Johnson was born on August 26, 1918 in White Sulphur Springs, West Virginia to Joylette and Joshua Coleman. Her mother was a teacher and her father was a farmer and janitor. From a young age, Johnson enjoyed mathematics and could easily solve mathematical equations. Her father moved Johnson’s family to Institute, West Virginia, which was 125 miles away from the family home so that Johnson and her siblings could attend school. She attended West Virginia State High School and graduated from high school at age fourteen. Johnson received her B.S. degree in French and mathematics in 1932 from West Virginia State University (formerly West Virginia State College). At that time, Dr. W.W. Schiefflin Claytor, the third African American to earn a Ph.D. degree in mathematics, created a special course in analytic geometry specifically for Johnson. In 1940, she attended West Virginia University to obtain a graduate degree. Johnson was one of the first African Americans to enroll in the mathematics program. However, family issues kept her from completing the required courses.

After college, Johnson began teaching in elementary and high schools in Virginia and West Virginia. In 1953, she joined Langley Research Center (LaRC) as a research mathematician for the National Advisory Committee for Aeronautics (NACA). Johnson was assigned to the all-male flight research division. Her knowledge made her invaluable to her superiors and her assertiveness won her a spot in previously all-male meetings. NACA became the National Aeronautics and Space Administration (NASA) in 1958. Upon leaving The Flight Mechanics Branch, Johnson went on to join the Spacecraft Controls Branch where she calculated the flight trajectory for Alan Shepard, the first American to go into space in 1959. Johnson also verified the mathematics behind John Glenn’s orbit around the Earth in 1962 and calculated the flight trajectory for Apollo 11’s flight to the moon in 1969. She retired from NASA in 1986.

Johnson has been the recipient of NASA’s Lunar Spacecraft and Operation’s Group Achievement Award and NASA’s Apollo Group Achievement Award. She received the NASA Langely Research Center Special Achievement Award in 1971, 1980, 1984, 1985 and 1986. Johnson has co-authored twenty-six scientific papers and has a historically unique listing as a female co-author in a peer-reviewed NASA report. She also received an Honorary Doctor of Laws from the State University of New York in Farmingdale in 1998 and in 1999, was named Outstanding Alumnus of the Year by West Virginia State College. In 2006, Johnson was awarded an honorary Doctor of Science from Capitol College of Laurel, Maryland. Johnson lives with her husband Lt. Colonel James A. Johnson in Hampton, Virginia and has three daughters Constance, Joylette and Kathy.

Katherine Johnson was interviewed by The HistoryMakers on February 6, 2012.

See how Katherine G. Johnson is related to other HistoryMakers
Click Here To Explore The Archive Today!