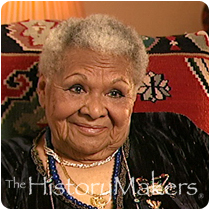 See how Katherine Dunham is related to other HistoryMakers

Legendary dancer, choreographer and anthropologist Katherine Dunham was born June 22, 1909, to an African American father and French-Canadian mother who died when she was young. At an early age, Dunham became interested in dance. However, she did not seriously pursue a career in the profession until she was a student at the University of Chicago.

During her studies, Dunham attended a lecture on anthropology, where she was introduced to the concept of dance as a cultural symbol. Intrigued by this theory, Dunham began to study African roots of dance and, in 1935, she traveled to the Caribbean for field research. Dunham was exposed to sacred ritual dances performed by people on the islands of Haiti and Jamaica. She returned to the United States in 1936 informed by new methods of movement and expression, which she incorporated into techniques that transformed the world of dance.

In 1940, she formed the Katherine Dunham Dance Company, which became the premier facility for training dancers. Alumnae include Eartha Kitt, Marlon Brando and Julie Belafonte. Dunham is credited with introducing international audiences to African aesthetics and establishing African dance as a true art form. Called the “Matriarch of Black Dance,” her groundbreaking repertoire combined innovative interpretations of Caribbean dances, traditional ballet, African rituals and African American rhythms to create the Dunham Technique, which she performed with her dance troupe in venues around the world. Her many original works include L’ag’ya, Shango and Bal Negre. She also choreographed and appeared in Broadway musicals, operas and the film Cabin in the Sky.

The Dunham troupe toured for two decades, stirring audiences around the globe with their dynamic and highly theatrical performances. These experiences provided ample material for the numerous books, articles and short stories Dunham authored.

Dunham accepted a position at Southern Illinois University in East St. Louis in the 1960s. During her tenure, she secured funding for the Performing Arts Training Center, where she introduced a program designed to channel the energy of the community’s youth away from gangs and into dance. Dunham was always a formidable advocate for racial equality, boycotting segregated venues in the United States and using her performances to highlight discrimination. She made national headlines by staging a hunger strike to protest the U.S. government’s repatriation policy for Haitian immigrants.

Throughout her distinguished career, Dunham earned numerous honorary doctorates, awards and honors. She was the recipient of a Kennedy Center Honors Award, the Plaque d'Honneur Haitian-American Chamber of Commerce Award, and a star on the St. Louis Walk of Fame.

See how Katherine Dunham is related to other HistoryMakers
Click Here To Explore The Archive Today! 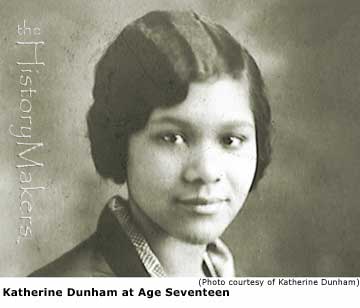 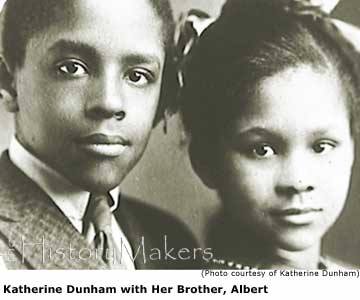