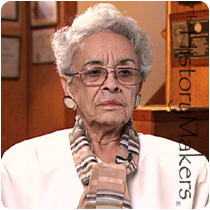 See how Katherine Bennett is related to other HistoryMakers
Donate Now

Women’s sports pioneer and educator Katherine Howard Bennett was born on October 17, 1922 in Elizabeth City, North Carolina. She was raised by a single mother who worked as a sorter and mender in a laundry. In 1940, Bennett earned her high school diploma from P.W. Moore High School, where she was a member of the debate team, band and drama club.

From 1940 until 1944, Bennett attended North Carolina A & T University where she encountered her first female athlete. Intrigued by the world of sports she immersed herself in athletics. Bennett, along with twins Mable and Inez Scott, were A & T’s first majorette team. She was also a member of the drama club, band, debate team, volleyball, tennis and gymnastics teams. Bennett also joined the Women’s Athletic Association and participated in “National Sports Day,” a weekend of sports for black, female college students. In 1944, Bennett earned her B.S. degree in English and health & physical education. She later returned to school, receiving her master’s degree in health education in 1947 from New York University and earning her doctorate in 1977 in physical education from Virginia Polytechnic University.

After earning her B.A. degree, Bennett taught physical education at Rosenwald School in South Mills, North Carolina. From 1947 until 1953, she worked as a health and physical education professor at Hampton Institute. In addition to teaching, Bennett also coordinated the women’s athletics program. In 1953, her husband was hired as the head football coach at Virginia State University; she followed him and began working as a professor of health and physical education. That same year Bennett created and established the Officiating Board and Women’s Officials at VSU. In the late 1950s, Bennett created guidelines that would ultimately lead to incorporating women’s athletics into to the Central Intercollegiate Athletic Association or CIAA. In 1968, Bennett coached the first competitive women’s basketball team at VSU, and in 1975 she directed the first CIAA women’s basketball tournament at Virginia State. In 1977, Bennett was appointed chairperson of the Department of Health, Physical Education and Recreation at VSU, the first woman to hold this post. That same year, Bennett became the first coordinator for women’s sports at Virginia State. In 1989 she was inducted in the Virginia Sports Hall of Fame. Bennett retired from Virginia State in 1992.

See how Katherine Bennett is related to other HistoryMakers
Donate Now
Click Here To Explore The Archive Today!