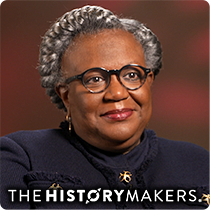 Favorite Color:
Turquoise
Favorite Food:
Sushi
Favorite Time of Year:
Fall
Favorite Vacation Spot:
Paris
Favorite Quote:
To Whom Much Is Given, Much Is Expected.

Favorite Color:
Turquoise
Favorite Food:
Sushi
Favorite Time of Year:
Fall
Favorite Vacation Spot:
Paris
Favorite Quote:
To Whom Much Is Given, Much Is Expected.

See how Karen Thomas is related to other HistoryMakers

Education administrator and marketing executive Karen Thomas was born on August 19, 1955 in Newark, New Jersey to Howard and Ruth Young. After graduating from Abraham Clark High School in 1973, Thomas received her B.S. degree in communications from Simmons College in Boston, Massachusetts in 1977, and her M.S. degree in sports and special events marketing from New York University in 1989. Thomas went on to receive both her M.A. degree in educational administration in 2008 and her Ed.D. degree in urban education in 2012 from Kean University in Union, New Jersey.

Upon graduating from Simmons College, Thomas worked as a copywriter in the public relations and marketing departments at Chemical Bank in New York from 1978 to 1980. She joined McGraw-Hill Publishing Company as a copywriter and worked in the book club direct marketing sales group from 1980 to 1982. From 1982 to 2000, Thomas served as marketing director at Essence magazine in New York City. During this time, Thomas created and produced The Essence Awards, an Emmy-award winning prime-time television special, The Essence Music Festival, and Essence television program. In 1999, Thomas founded Marion P. Thomas Charter School; and, a year later, she became its chief executive officer. In 2011, Thomas joined Kean University as adjunct professor for the graduate school of education where she taught organizational theory, supervision and leadership, and curriculum development. In 2019, she also served as an adjunct professor at Simmons University, where she taught a course on digital culture before retiring from academia later that year.

In 1998, she received the NAACP Image Award for Excellence in Television Production, and an Emmy Award for the Essence Awards Prime Time TV Special, Patti Labelle tribute. Thomas received the Alumnae Achievement Award from Simmons College in 2000. She was also the recipient of the 2015 Profiles in Diversity Journal Company and Executive Women Worth Watching Award for her contributions to education. In 2017, she received the Education Innovator of the Year Award from New Jersey Charter School Association.

Thomas resides in Paris, France, where she studies art history.

Karen Thomas was interviewed by The HistoryMakers on October 26, 2018.

See how Karen Thomas is related to other HistoryMakers