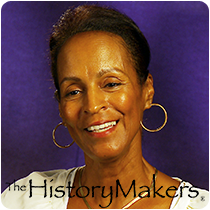 See how Karen Slade is related to other HistoryMakers
Donate Now

Radio station manager Karen E. Slade was born on October 18, 1955 in Cleveland, Ohio to Violette Crawford and Charles Slade. In 1977, Slade earned her B.S. degree in telecommunications from Kent State University, where she was a member of the Alpha Kappa Alpha Sorority. She went on to obtain her M.B.A. degree from Pepperdine University in 1991.

Upon graduation from Kent State University, Slade was hired as an account executive at Xerox Corporation in Cleveland, Ohio. For the next decade, she worked in various positions for Xerox, including as a marketing consultant, project manager and dealer sales manager. In 1988, Slade was promoted to a regional sales manager in Atlanta, Georgia. Then, in 1989, she returned to Los Angeles, California to work as vice president and general manager of KJLH, the radio station owned by R&B artist Stevie Wonder. As general manager, Slade led programming and sales as well as the station’s efforts to address local and national issues in the African American community. Under her leadership, KJLH Radio received the distinguished George Foster Peabody Award and the NAACP Image Award.

Slade has been honored by the California Legislative Black Caucus Foundation and the Black Business Association, and received the Phenomenal Woman Award from California State University, Northridge. Radio Inc. magazine named Slade one of the 25 most influential African Americans in radio. She served on the board of the Los Angeles Urban League from 1989 to 1995, and has been a member of the Black Media Network and the National Association of Black Owned Broadcasters since 1989.

Karen Slade was interviewed by The HistoryMakers on July 28, 2014.

See how Karen Slade is related to other HistoryMakers
Donate Now
Click Here To Explore The Archive Today!