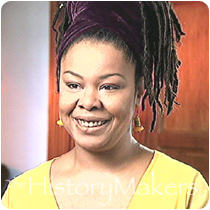 Violinist Karen “Lady in Red” Briggs was born in New York City on August 12, 1963, and grew up in Portsmouth, Virginia. At an early age, Briggs displayed a natural talent for the violin and began playing many pieces by ear. While in high school, she received her first paying job, performing at a wedding for twenty dollars.

After graduating from high school in 1981, Briggs attended Norfolk State College where she majored in music education and mass media. In 1983, during her sophomore year in college, she began playing with the Virginia Symphony where she performed for four years. She returned to New York City where she won three Amateur Nights at The Apollo Theater. After getting married in 1988 and moving to Los Angeles, California, Briggs began performing regularly at the jazz club Marla’s Memory Lane. In 1989, Briggs embarked on her first professional tour with Soul II Soul, performing throughout America and Japan. In 1991, Briggs successfully auditioned for Yanni, the Greek-American new age keyboard composer. Briggs most notable performance was during Yanni Live: At the Acropolis wearing the now infamous red dress. Following this performance, she spent the next thirteen years touring and recording with Yanni, in Tribute which was performed both at the Taj Mahal in Agra, India and in the Forbidden City, in China.

Briggs made her Carnegie Hall debut in 1994, performing with pianist Dave Gruisin. She has also performed with a number of other artists over the years, including Stanley Clarke, the Wu Tang Clan, En Vogue and Chaka Khan. At the time of the interview, some of her current projects included recording with Hidden Beach Records and performing with the Unrapped Band.

Karen Briggs was interviewed by The HistoryMakers on October 4, 2004.

See how Karen "Lady in Red" Briggs is related to other HistoryMakers
Click Here To Explore The Archive Today!